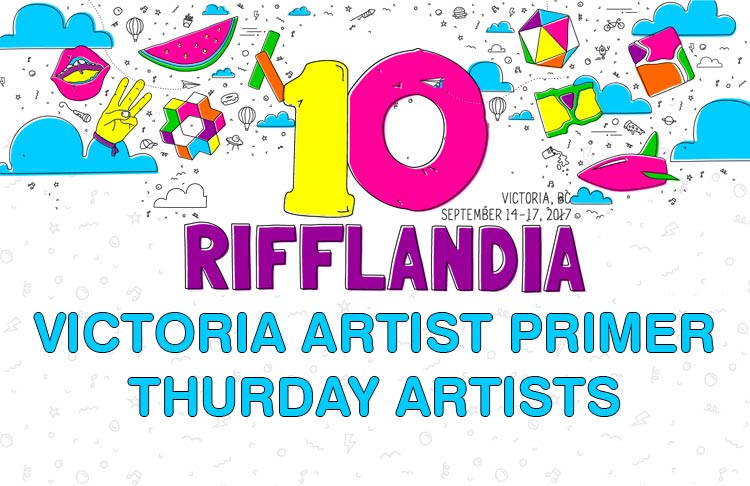 Here is your Rifflandia 2017 Victoria Artist Primer for Thursday, September 14. Below you can find out about artists performing on Thursday that either are from Victoria or were once Victoria based musicians.

9:30pm
LABS at Capital Ballroom (formerly Sugar Nightclub)
LABS performed their debut live show at Rifflandia 2015 at Copper Owl. In February of 2016 they released a 5-song EP and were The Zone’s February 2016 Band of The Month. LABS began as an experiment between vocalist Lindsay Bryan and producer Adam Sutherland to create samples for electronic music producers, but they ended up creating full songs. Victoria music fans may recognize Lindsay and Adam for being in local cover band The Bright Side. Rounding out the band are Matt Longpre and Keenan Murray of former Rifflandia artist/Victoria band Sunhawk.

Smash Boom Pow at Anian
Smash Boom Pow are brothers Ulysses and Zane Coppard. They were a top 12 finalist of the 2015 and final Peak Performance Project. While the duo is now based in Vancouver, at one time Ulysses was the frontman for former Victoria band Johnny Tango. For some reason, whether it be bad timing of scheduling conflicts, we have not had the chance to cover their shows in town.

DJ Marlee at Studio Robazzo
DJ Marlee began DJing at the age of 19 and 15+ years later is “rediscovering her first love and focusing on the music before the scene.” Below is a set we found on her soundcloud, but a more current mix done this year that we have no way of embedding is at her website.

10:00pm
Lovecoast at Copper Owl
Lovecoast are an indie soul-pop band based partly out of Victoria. Vocalist Danielle Sweeney and drummer Jesse McNeill now all Victoria home while other members of the band hail from Nanaimo. Lovecoast were The Zone’s April 2016 Band of The Month and have performed at Rifflandia, Ska Fest and Rock of The Woods in the last couple years. At last year’s Rifflandia, ANIAN was so packed full of people we had to shoot their set from behind a fence so if you plan on seeing them at Copper Owl, get there early.

10:30pm
Stinging Belle at Capital Ballroom (formerly Sugar Nightclub)
Consisting of The [email protected]’s Allie Bowman (vocals) and Jon Williams (drums) plus guitarist Jordan Ambrosi, Stinging Belle is a rock band that has no recorded music or live videos for public consumption (yet). Despite that, their live shows have garnered enough word of mouth to land them spots at Rock The Shores 2016, Otalith 2016 and this year’s Spirit of 150 Victoria. We have of a number of their performances in the last two years. We just can’t show you. The best we can do is show you a 10 second sample we put into our recap video of the 2016 YYJ Rocktographers Showcase (start the clip at 1:45)

Steph Macpherson at The Duke Saloon
Steph Macpherson continues to be one of our favourite voices and songwriters in the Victoria Music Scene ever since we first heard her in 2010 opening for Vince Vaccaro. Over the years she’s performed at Lilith Fair, been a Zone Band of The Month, nominated for awards and recorded an album in Nashville Tennessee.

Lyssa at Studio Robazzo
Lyssa is a Victoria DJ who got her start in 2005. She spent 11 years in Mexico and “being fortunate enough to be exposed to Latin culture, she has a strong desire to explore her roots in her musical selections.” Lyssa has called Victoria home since 2007.

11:00pm
Fox Glove at Copper Owl
Fox Glove is a female folk/pop trio from Victoria that have collaborated with other locals Jesse Roper, Astrocolor and Carmanah in the last year. Once you hear their harmonies you’ll see why their voices are in demand. Also, come for the harmonies… Stay for their witty banter between songs.

11:30pm
J Feud at Studio Robazzo
J Feud is a Victoria underground house and techno DJ. He has been performing for 18 years.

12:30am
Carmanah at Capital Ballroom (formerly Sugar Nightclub)
If you haven’t heard the Carmanah‘s Laura Mitic sing, you’ve missed out one of most flawless voices in Victoria. We’ve covered Carmanah countless times in the last seven years and don’t remember one time hearing a bad note. Surrounded with strong male harmonies, multiple instruments and engaging songs it’s no wonder they’ve been a local favourite.

Leeroy Stagger at The Duke Saloon
For some unknown reason, we at this website haven’t covered Leeroy Stagger since 2012. That will definitely change this year since he’s playing ALL FOUR days of Rifflandia anchoring each night at The Duke Saloon and performing at Royal Athletic Park on Sunday. Last year he won the Alberta Peak Performance Project. Rather than sharing a video we shot five years ago, here’s some live footage that’s more recent.

Rennie Foster at Studio Robazzo
Rennie Foster is a DJ/Producers originally from Victoria known for cutting edge underground techno and house music. He moved to Tokyo, Japan in 2004 and become in important part of the Japanese club scene before moving to Vancouver in 2011.

1:00am
Quoia at Copper Owl
Quoia perform what they at one time described as “coastal groove”. A little bit country, a little bit folk and a little bit Americana. Members of the band were instrumental in the founding of the Tall Tree Music Festival.