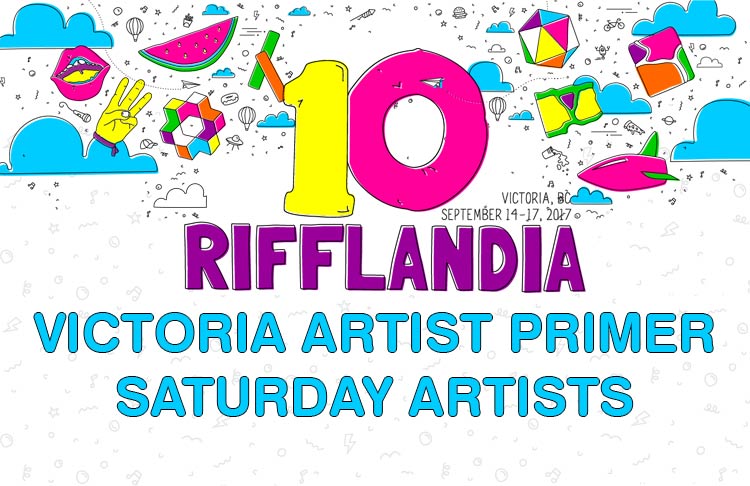 Here is your Rifflandia 2017 Victoria Artist Primer for Saturday, September 16. Below you can find out about artists performing on Saturday that either are from Victoria or were once Victoria based musicians.

4:30pm
Band of Rascals at Royal Athletic Park (main stage)
Band of Rascals graduate to the main stage this year after performing in the Rifftop tent at Rifflandia last year. They have a new single with a new album recorded at the Warehouse Studio in Vancouver on the way.

8:00pm
NO TYPE at Capital Iron
NO TYPE are an Victoria electronic music duo playing “bass-house, groovy, melodic fugure-bass to smoth, vibey, saxy trap” according to their bio

9:00pm
Murge at Phillips Backyard
DJ Murge is no stranger to the Victoria festival circuit. He’s performed just about every festival in our region that you can name.

Smasha at Capital Iron
Smasha is a DJ with over a decade of experience. She started out in Calgary in their drum and bass scene.

Jennay Badger at Lucky Bar
Jennay Badger is a Victoria DJ spinning “anything from low heavy bass tones to 4×4’s that pound a grin on to your face” according to her bio.

10:00pm
Astrocolor at Phillips Backyard
Astrocolor began as a Christmas music side project of ambient jazz band Weird Party. Since then they teamed up with Neil Cooke-Dallin of Righteous Rainbows of Togetherness to add an electronic music element to the group and have released two of a series of three EPS in the last 12 months. Last year their performance in the Rifftop tent had the audience grooving and wanting more.

Kytami at Capital Iron
Kytami is a “violinist extremist” mixing live classical influenced violin with hip hop and electronic music. Kytami is joined by DJ Phonik Ops and Spaceboots’ Deriek Simon. You can expect a high energy set at Capital Iron. Below is a recent performance in Surrey we found.

10:30pm
Electric Timber Co. at The Duke Saloon
The Electric Timber Co. are a music collective that play soulgrass, roots and rock. Most in the group you’ll also find in other bands and music projects. They’re the house band of the annual Brewery and The Beast events and can be found performing at The Duke and Bard & Banker from time to time. The lineup in the band varies depending on the day and includes musicians in a number of other local bands.

Salamander at Studio Robazzo
Salamander is a Victoria DJ and co-founder of Victoria nightclub institution ‘Stir Fry’ which started in 1997. Oh and by the way, he’s also Atomique Productions’ Dimitri Demers… Salamander does not have any online presence so we unfortunately don’t have any examples to share.

11:30pm
Illvis Freshly at Lucky Bar
Illvis Freshly are a two MCs, a guitarist and one DJ. They were the first Zone Band of The Month for January 2017 and have since been hitting the festival circuit around. Last year at Rifflandia they performed at Phillips Backyard. This year they’ll be at the more intimate Lucky Bar. Will Caleb Hart make a guest appearance? You’ll just have to go to find out.

12:30am
Leeroy Stagger at The Duke Saloon
For some unknown reason, we at this website haven’t covered Leeroy Stagger since 2012. That will definitely change this year since he’s playing ALL FOUR days of Rifflandia anchoring each night at The Duke Saloon and performing at Royal Athletic Park on Sunday. Last year he won the Alberta Peak Performance Project. Rather than sharing a video we shot five years ago, here’s some live footage that’s more recent.