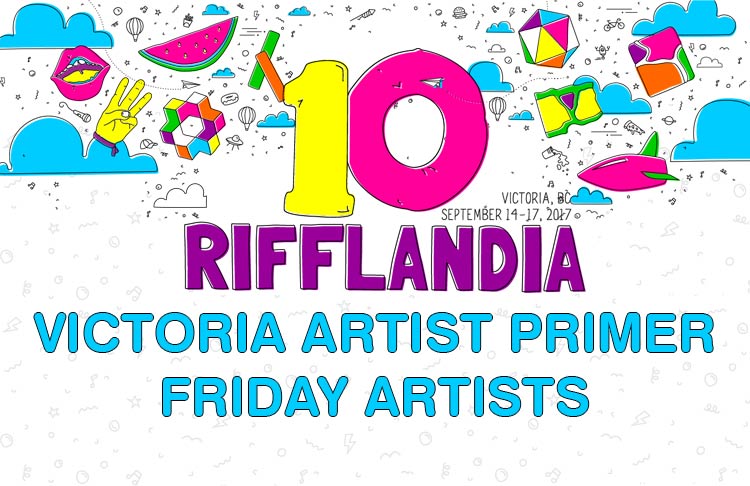 Here is your Rifflandia 2017 Victoria Artist Primer for Friday, September 15. Below you can find out about artists performing on Friday that either are from Victoria or were once Victoria based musicians.

3:30pm
The Leg-Up Program at Royal Atheletc Park (Rifftop Tent)
The Leg-Up Program is a collective of singers, rappers and musicians performing a mix of soul, funk, hip hop and R&B. Almost everyone in the group are in other active bands or were formerly part of other bands. There’s people representing Everybody Left, Sweetleaf, Entangados and The New Souls just to name a few.

8:00pm
Yeezy Yee at Capital Iron
Yeezy Yee is a Victoria hip hop/dance DJ. She has been DJing for the last 6 years in Victoria and will open the Capital Iron stage Friday night.

Listen to Yeezy-Yee Bass Down Low Mix byYeezy-Yee on hearthis.at

9:00pm
Paint The Town Red at Capital Iron
Paint The Town Red are a hip hop group consistening of rappers YellowWolf and Barndawg, female vocalist Addie Elliott, and DJ Goadman. We couldn’t find any live video so here is a music video for their single ‘The Remedy’.

9:30pm
Fallbrigade at The Duke Saloon
I once told Fallbrigade‘s Caleb Scott that their music would be perfect for movie/TV soundtracks. There’s just something about their songwriting that when you close your eyes listening to some of their songs you can just picture a credit roll or video montage. Low and behold one of their song is featured in Everybody Loves Somebody

11:30pm
SpaceBoots at Capital Ballroom (formerly Sugar Nightclub)
SpaceBoots are a party rock band that is really a sight to behold. Often featuring scantily clad women dancing on stage and most of the guys in the band are usually shirtless. Their music tends to contain sex and drug laced lyrics and their stage presence induces inappropriate sing-alongs. Everyone should experience a SpaceBoots show at least once.

LIINKS at Lucky Bar
LIINKS are Victoria’s Georgia Murray and DWhiz. The duo debuted as LIINKS three years ago with their breakout single ‘The Break’ which was featured on Bell Media owned radio stations across Canada for their ‘Future Star of The Month’ in April of 2014. Unfortunately there is no live performance video that can be publicly found/shared so here is the music video for their new single ‘Raise It Up’.

12:30am
Leeroy Stagger at The Duke Saloon
For some unknown reason, we at this website haven’t covered Leeroy Stagger since 2012. That will definitely change this year since he’s playing ALL FOUR days of Rifflandia anchoring each night at The Duke Saloon and performing at Royal Athletic Park on Sunday. Last year he won the Alberta Peak Performance Project. Rather than sharing a video we shot five years ago, here’s some live footage that’s more recent.