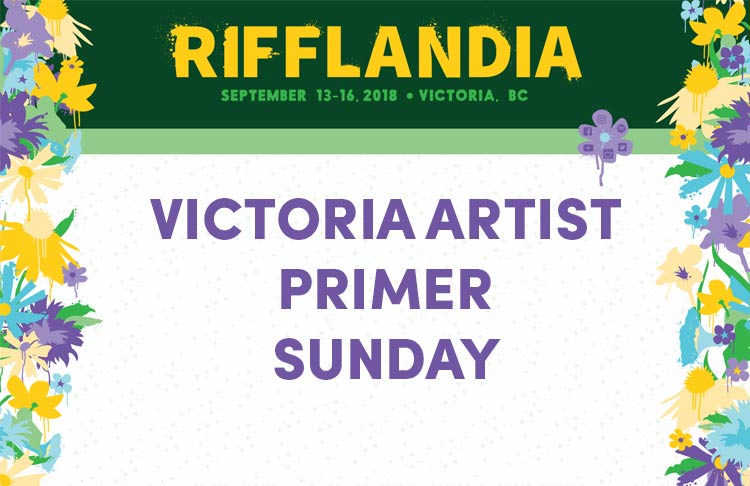 Here is your Rifflandia 2018 Victoria Artist Primer for Sunday, September 16. Below you can find out about artists performing on Sunday that either are from Victoria or were once Victoria based musicians.

1:00pm
The Choir & The Chorus at Royal Athletic Park
The Choir and The Chorus are both non-auditioned community choir that sings original arrangements of contemporary songs. Both are directed by Marc Jenkins.

1:30pm
Vic High R&B Band at Royal Athletic Park
The Vic High R&B Band consists of students in Victoria High School’s music program. A number of alumni from the program have moved on to successful music careers of their own.

7:15pm
Current Swell & Friends at Royal Athletic Park
Current Swell are a roots/rock band from Victoria. 2011 winners of Vancouver Peak Performance Project. They have headlined The Phillips Backyard Weekender in 2017 and Rock The Shores in 2016, and just last Saturday opened the main stage of the inaugural SKOOKUM Music Festival in Vancouver opening for Florence and The Machine. Who are Current Swell’s friends? We’d imagine some well known musicians from other local bands

9:00pm
Mystery Lover at Capital Ballroom
Mystery Lover are a Victoria indie rock/mystic emo band formed in 2017. “Their music calls on a diverse array of influences such as Death Cab for Cutie, Mount Eerie, Bon Iver, Japandroids and the Hotelier and is informed by sonic and poetic explorations of Eros/romance, archetypal symbolism and myth, our local urban and natural spaces and an oceanside view of churning emotional waters.”

11:00pm
Distant Grand at Capital Ballroom
Distant grand are a Victoria ‘electro-soul’ duo. “Recognizing the need for a more sensualistic sound in the slower, deeper realm, Distant Grand is bringing sultry back to the dancefloor.”