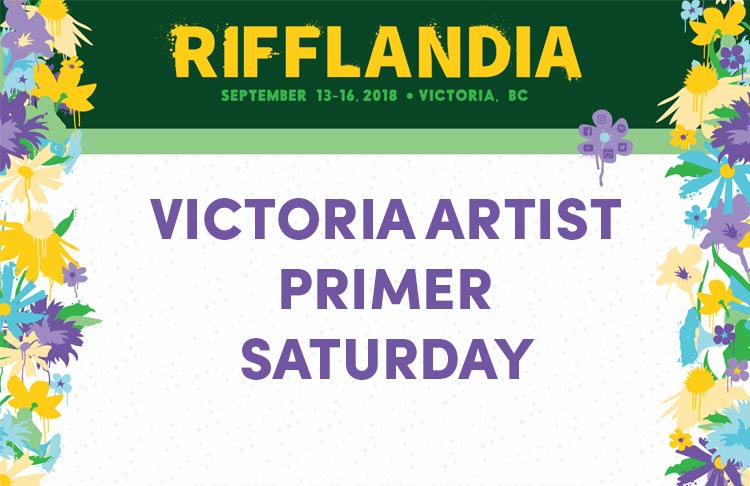 Here is your Rifflandia 2018 Victoria Artist Primer for Saturday, September 15. Below you can find out about artists performing on Sunday that either are from Victoria or were once Victoria based musicians.

1:00pm
The Chorus at Royal Athletic Park
The Chorus is a non-auditioned community choir that sings original arrangements of pop, folk and indie music. Basically, so many singers wanted to join The Choir that a second group was formed. The first time The Chorus will perform at Rifflandia.

2:00pm
Stel at Royal Athletic Park
Stel are an indie pop/rock band from Victoria. “They draw influence from artists like Billie Eilish, Charlotte Day Wilson, and Bleachers.” in April of this year they were a Zone Band of The Month

2:35pm
LIINKS at Royal Athletic Park
LIINKS are Victoria duo Georgia Murray and DJ DWhiz. In 2014 their single ‘The Break’ was put into rotation at radio stations across Canada for Bell Media’s Future Star of The Month campaign. This year they rolled out a number of new singles before the release of their debut full-length album ‘Ridge Road‘ on September 7th.

8:00pm
TigRess at Electric Avenue
TigRess is a Victoria DJ/Producer. Her sets “Serve up sassy house and booty bass music.” In April she released her first single ‘Shake Dat‘

8:30pm
Peach Pyramid at The Rubber Boot Club
Peach Pyramid is “the brimming honesty and personal experience of one Jen Severtson”. Her music is described as surf/dream pop. Her debut album ‘Repeating Myself‘ was released last fall.

9:00pm
Paint The Town Red at The Phillips Backyard
Paint The Town Red are a First Nations hip hop group from Victoria consisting of rappers YellowWolf and Barndawg, singer Addie Elliott and DJ Goadman. In July, they performed at the BC Legislature for Canada Day

Applecat at Electric Avenue
Applecat is a Victoria DJ, poet and vocalist. She “specializes in Deep Dubstep, Fairytale Bass, Trap, World, and IDM.” She is also the focus of a feature documentary about women in electronic music called ‘Amplify Her’, released worldwide in 2017.

9:30pm
Johnny Gr4ves at Capital Ballroom
Johnny Gr4ves is a pop/R&B artists from Victoria. “At the early age of 20, Johnny Gr4ves has already established himself as a Pop powerhouse performing and writing with artists such as Pegboard Nerds, Dawid Kwiatkowski, ARMNHMR, Konrad Oldmoney, and Desiree Dawson.”

Lito Ford at Copper Owl
Lito Ford is a Victoria DJ who plays disco from the 70s and 80s. “Over the last 20 years of listening to electronic music, one of her most highly influential discoveries arrived with the 2004 release of Morgan Geist’s ‘Unclassics’ album: the introduction of Italo Disco to Lito Ford. The instant love prompted a musical journey that continues to grow to this day.”

Wholesale Hot Wings at Studio Robazzo
One-Half of local DJs/Producers NO TYPE (Max Lyons) and Submersive Tribe elder Phi-Rex (Phill Phan), they will be performing a special B2B Rifflandia set full of the latest and greatest Trap, Future-Bass, Bass Music and Hip-Hop. We could not find any mix examples online.

Velvet feat. Kuba Oms at Canoe Brewpub
If you remember going to Steamer’s Pub on a Sunday night, chances are you saw the legendary groove band Velvet. Kuba Oms has since embarked on his own solo career, but Velvet have still periodically performed at Canoe Brewpub including this year at Rifflandia.

Susannah Adams at The Hop
Susannah Adams is a jazz vocalist from Victoria. “Adams brings a decidedly fresh approach to the genre with her compelling style, and with the release of her highly acclaimed debut album ‘As the Morning Light‘ she is making her mark as an original lyricist, composer and arranger.”

Dylan Stone Band at The Duke Saloon
The Dylan Stone Band are a Rock/Alt-Country band from Victoria. Stone’s “influences are clear, think Tom Petty, early Ryan Adams and Wilco, yet Stone has his own take on the heartland rock of his heroes, rightfully earning a spot in any dog-eared record collection.”

BEL at The Hop
BEL is a solo project of Victoria’s Dan Belgue. BEL “weaves warm waves of sound and texture together into a tapestry of lo-fi, hazy folk music.” He released his 6-song album ‘Basements‘ in August.

11:00pm
Manta at Studio Robazzo
Manta is a Victoria DJ who plays tech-house. We have no other bio info or any samples of his sets.

11:30pm
Fever Feel at The Rubber Boot Club
Fever Feel are a Victoria rock band with “dynamic melodies, mindful compositions and powerful performances infused with the hazy wash of 60s psychedelia.” Their latest single ‘Somewhere Down The Line‘ was released in May.

Ryan Evans and The Tumblin’ Dice at The Duke Saloon
Ryan Evans and The Tumblin’ Dice are a Country music band from Victoria. If you ever attended any Gone Country nights that happened at Upstairs Cabaret, they were a staple there. They have also frequently performed at The Duke Saloon and at Sunfest Country Music Festival. Lead singer Ryan Evans released his new single ‘Anywhere But Here‘ in August.

Looelle at The Hop
Looelle is the combined musical efforts of Victoria’s Ellen Trottier & Niloo Farahzadeh. “Armed with a guitar & a cajon, these ladies wrap their warm vocal harmonies around topics of love, loss and activism.”

12:30am
Murge & The Golden Era at Capital Ballroom
Murge is a Victoria DJ, producer, label owner and founder of Victoria’s first DJ school. For Rifflandia this year, his set “will be a journey through the “Golden Era” of 90’s hip hop.” He Will also have special guests Ishkan, Ashleigh Eymann and Riegs on stage performing live covers of golden era jams.

The County Line at The Duke Saloon
The County Line are a Victoria “country-pop duo with an r&b and rock edge.” They released two singles to country radio from their debut self-titled EP and have appeared on the Hallmark Network program Chesapeake Shores.

1:00am
Audiowrx at Studio Robazzo
Audiowrx are a electronic music duo consisting of Victoria’s Cole Magnusson and California based Dominic Brunley. “They represent the heavy west coast bass sound to its full extent.”