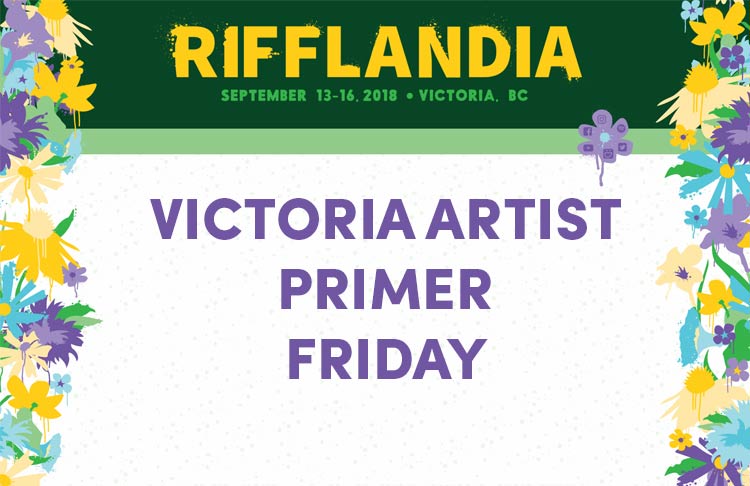 Here is your Rifflandia 2018 Victoria Artist Primer for Friday, September 14. Below you can find out about artists performing on Sunday that either are from Victoria or were once Victoria based musicians.

3:00pm
The Choir at Royal Athletic Park
The Choir is a non-auditioned community choir that sings original arrangements of contemporary songs. This will be the fifth consecutive year The Choir will appear at Rifflandia.

7:00pm
The New Souls at Canoe Brewpub
Victoria’s The New Souls are… well… a soul band with a little bit of R&B and funk mixed in. The band consists of members of The Midnights and alumni of Vic High’s R&B program. Their debut full-length album ‘Time is Told Away‘ was released in July.

8:00pm
Jennay Badger at Electric Avenue
Jennay Badger is a Victoria based DJ who began her career in Campbell River in the mid-late 2000s. “Her roots may be based in house music, but this lady has one versatile library.”

8:30pm
Alexandria Maillot at The Rubber Boot Club
Alexandria Maillot is a “Swoon Rock” singer-songwriter from Vancouver Island. In the early 2000s she was scouted by Victoria’s David Foster when she was 12 years old. In 2006 at the age of 13 she won the ‘Victoria Idol’ competition. Maillot was a Peak Performance Project finalist in Vancouver in 2009 and 2012. At Rifflandia you’ll find Vinyl Envy’s Matthew Andrade on drums for her set.

The Carlines at Canoe Brewpub
The Carlines are a Victoria indie-rock band. They’re a former Zone Band of The Month from May 2014 and have performed at Rifflandia in 2013 and 2016. Their debut full-length album ‘Closer to You‘ was released in April.

9:00pm
BOUSADA at Electric Avenue
BOUSADA is an electronic artist/singer from Victoria. His live show walks the line between a live band and a DJ performing live electronic music with a loop pedal, midi keyboards, samplers, and a drum pad along with other live musicians at times.

9:30pm
Smash Boom Pow at Capital Ballroom
Smash Boom Pow are an alt-rock band from Victoria. Brothers Ulysses and Zane Coppard founded the band in 2012. They were a finalist in the final Peak Performance Project in Vancouver in 2015. They were named the Zone Band of The Month in May. Ulysses was once the lead singer of Victoria band Johnny Tango.

Inkster at Copper Owl
Inkster is a Victoria DJ. I have no other bio information and he has no tracks or set recordings online. You’re just going to have to go see him for yourself to find out what his music sounds like.

Jung at Studio Robazzo
– Jung (aka. Toni Hall) is a Victoria DJ formerly going by Emplicit. Toni recently performed as the DJ for Toronto rap group The Sorority at the Phillips Backyard Weekender. Junge’s sound explores the dark and the rhythmic, with a focus on sharing queer and feminist artists.

Layten Kramer at The Duke Saloon
Layten Kramer is an “Acid Western/Psychadelic Folk” artist based in Victoria. His latest 4-song EP ‘Glory‘ was released in April.

Cosy Father at The Hop
Cosy Father is Victoria’s Liz McArthur. Her bio says, “Cosy Father is a reclusive hillbilly with the voice of a young woman who writes, sings, records and weaves dreams in a small room in Victoria, BC.” Some may recognize McArther from her time working at CFUV, CBC and CFAX 1070.
https://www.facebook.com/CosyFather/

10:00pm
Neon Steve at Electric Avenue
Neon Steve is a Victoria DJ/Producer and last played Rifflandia in 2014. “Steve has cultivated his sound, resulting in a reputation for high energy sets that blend and twist conventional genres.”

10:30pm
No Liars at Capital Ballroom
No Liars are a punk rock band from Victoria. In March of 2016 they were a Zone Band of The Month and in March of this year they released their debut full-length album ‘The Cause & The Cure.’ “They draw influence from other edgy, melodically driven bands such as Alexisonfire, Refused, At The Drive In, and A Wilhelm Scream.”

Lyssa at Copper Owl
Lyssa is a Victoria DJ who got her start in 2005. She spent 11 years in Mexico and “being fortunate enough to be exposed to Latin culture, she has a strong desire to explore her roots in her musical selections.” Lyssa has called Victoria home since 2007.

Elder Sister Plum at The Hop
Elder Sister Plum is Victoria folk singer-songwriter Tanya Semple. “Her swashbuckling folk lullabies and musical ghost stories provide a treat for every listener.” She was also a member of Victoria band The Half Moon Shine.

11:30pm
Bad Hoo at Capital Ballroom
Bad Hoo describe themselves as “Victoria’s very own self-appointed deputies of fun rock.” Their new LP is due out this fall.

Ocie Elliott at The Rubber Boot Club
Ocie Elliott are Victoria duo Jon Middleton (of Jon and Roy) and Sierra Lundy. Last year they released their debut self-titled EP and another EP is due out this fall.

Fallbrigade at The Phillips Front Yard
Fallbrigade are a folk rock band founded by brother/sister duo Caleb Scott and Esther Jungclaus in 2012. They were a Zone Band of the Month in July 2016 and this year reached the top 10 in the CBC Searchlight contest.

Kirsten Ludwig at The Hop
Kirsten Ludwig is a singer-songwriter originally from Calgary, but now calls Victoria home. “A nomad at heart, Ludwig finds true solace in her quiet ambition, gentle voice, and mellotron-induced thoughts.” She released the latest single ‘There You Are‘ in August and the full album being released through Kathryn Calder’s Oscar St. Records is due out in October.

Rennie Foster at Studio Robazzo
Renne Foster is a Victoria DJ and has been in the industry for more than two decades. His sets “pays homage to Detroit techno, Chicago house music, B-boy culture, plus subtle nods to vogue culture, new wave, skateboarding, old school rave and all other subculture that fuels Rennie’s rebellious and infamous presence in the underground.”

High Noon to Midnight at The Duke Saloon
High Noon to Midnight are a Victoria rock band that ” consists of four guys who share the simple notion that music sounds better when you have a damn good time making it.” They were Zone Band of The Month in March 2017. At their shows you’ll see “soulful, emotionally driven vocals and blistering saxophone solos.”

Abraham at The Hop
Abraham is Victoria’s Sydney Batters. Her music is a “blend of soulful electric folk, jazzy undertones and a low-fi nuance.” She is also one half of another Rifflandia act Honey Rose.

Horsey No Rider w/ Half Stack at Vinyl Envy

XL The Band at Lucky Bar