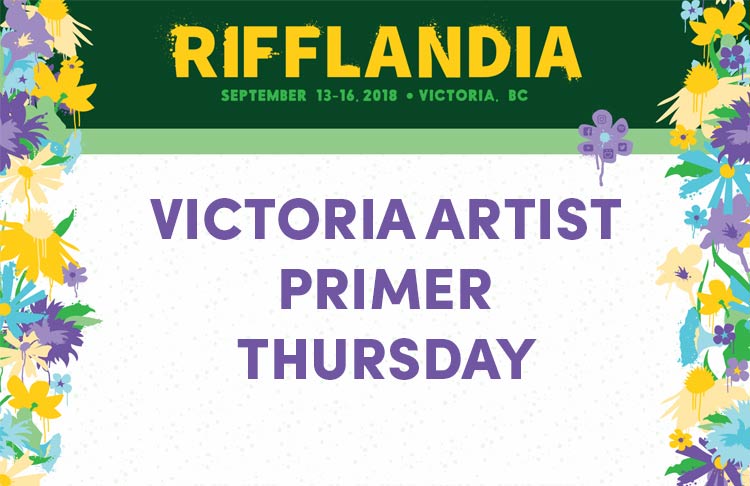 Here is your Rifflandia 2018 Victoria Artist Primer for Thursday, September 13. Below you can find out about artists performing on Sunday that either are from Victoria or were once Victoria based musicians.

7:00pm
Quarterback at Canoe Brewpub
Quarterback is Victoria R&B singer Quinn Bates. Bates is also part of collective group Electric Sex Panther who are also in the lineup and are the weekly house band for Canoe Brewpub on Thursday evenings

8:00
SHRKY at The Phillips Backyard
SHRKY is a Victoria DJ and at one time was the lead singer of the original incarnation of all-female rock band White Hot Jet. She recently starting singing hip hop in a project with Branch.

9:00
The Sky Lit Up at Vinyl Envy
The Sky Lit Up are an experimental rock band fronted by Eric Hogg of Hush Hush Noise and owner of recording studio Soma Sound. We couldn’t find any live videos online, so here is their 2014 self-titled album on Bandcamp.

The Sky Lit Up: https://www.facebook.com/theskylitupband

9:30pm
No Type at Studio Robazzo
No Type are a Victoria Electronic producer duo ” influenced by artists of many varying types such as Anevo, Josh Pan, Skrillex, and CRANKDAT.”

Teenage Violets at The Duke Saloon
Teenage Violets are a Victoria rock band consisting of people in other Victoria bands (including Buzzard, Thepurrverts, Scars & Scarves, Bonehoof, Tight Hair, etc.). They describe their sound as “somewhere between Screamin’ Jay Hawkins and Wanda Jackson.” Teenage Violets won this year’s ‘Victory to Vinyl’ battle of the bands contest at Darcy’s Pub Westshore.

10:00pm
COTIS at The Phillips Front Yard
COTIS is 19-year-old Callum Afcouliotis. He is a Victoria hip hop/pop artist who in 2017 was discovered by ART:ERY music group in Stockholm, Sweden.

Lovecoast at The Duke Saloon
Lovecoast are an indie soul pop band based in Victoria. The band was formed in 2013 out of Squamish and Nanaimo. Their debut full length album ‘The Trip’ was released in April

Psychic Pollution at Copper Owl
Victoria’s Psychic Pollution is the solo electronic projecct of Jro Schuurman, one of the owners of Victoria music venue the Copper Owl. For live sets he performs analogue synths and drum machines without a computer.

Takahashi at Studio Robazzo
Takahashi is Victoria DJ Bonnie Takahashi. Takahashi is originally from Alberta and has been spinning vinyl since early 2000s.

11:30pm
Outsider at Studio Robazzo
Outsider is Victoria DJ Jon Camilleri. Outsider has been a professional DJ for more than 15 years. His sound is described as dark and atmospheric.

Himalayan Bear at The Rubber Boot Club
Himalayan Bear is the solo project of Victoria singer-songwriter Ryan Beattie. He was a co-founder of art-rock group Chet and also a part of indie rock band Frog Eyes.

Quoia at The Duke Saloon
Quoia are no strangers to the music scene in Victoria and Vancouver Island. They’re the founding band of the Tall Tree Music Festival and Song & Surf Music Festival and have performed multiple festivals in the region over the years. Mike Hann and Tyler Harvey of Quoia performed acoustically at last year’s Rifflandia for the MusiCounts TD Lounge.

Honey Rose at The Hop
Honey Rose is Hawk and Steel lead singer Peter Gardner and Sydney Batters (aka Abraham, who is also in the Rifflandia lineup). The project started out “as a way to kill some time, learning old songs from days gone by.” Their sound “harkens back to a simpler time of folk and country.” I find their sound to be a bit like Zooey Deschanel and M. Ward’s project She & Him.

12:30am
Diamond Cafe at Capital Ballroom
Diamond Cafe is the solo project of Victoria’s Tristan Thompson. Close your eyes and you can hear some of Prince’s 80s synth pop/R&B style. Thompson began his career in 2014 as a Teen Pop artist, a completely different style to what he performs as Diamond Cafe

Fnkstll at Copper Owl
Fnkstll is Victoria Electronic duo Mafred lotz and Jason Camp. Their productions “are dark and minimal using classic sounds like the TR-707, TB-303 and a range of Detroit Techno chords and samples.”

Nathan Jonson at Studio Robazzo
Nathan Jonson is a DJ from Victoria. He’s formerly known as Hrdvsion. According to his bio, “The switch of alias isn’t about doing something different but about clearing the palette and some preconceptions of his music, about channelling his accrued influences and knowledge into something fresh and coherent.”

Dirty Mountain at The Duke Saloon
Dirty Mountain are a roots/rock band fronted by Elli Hart and formed in Victoria in 2016. They were a Zone Band of The Month in February 2016 and have performed at Rock The Shores, Sunfest, Victoria Canada Day and a number of other festivals.