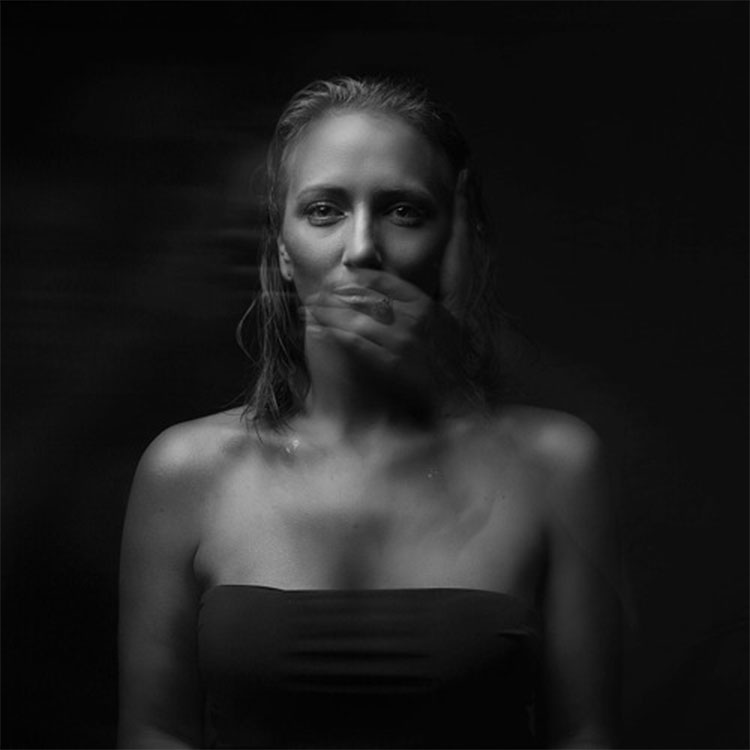 Victoria’s Steph Macpherson is set to release her new EP ‘Cowards’ later this month. It’s the singer/songwriter’s first new music since her 2015 sophomore full-length album ‘Stones.’ The record is being self-released by Macpherson.

We were given a preview of EP and noticed a slightly darker theme in both the songs lyrics and the EP’s cover art compared with her past music. Macpherson says the EP is a conversation with herself as she fought through a loss of direction.

“I burned out in a lot of different ways and it took me a lot longer than I wanted to come back from that,” said Macpherson. “I even seriously considered just trying to stop, but music is my catharsis so stopping isn’t really an option.”

From the get-go, the theme of working out of a rut is laid out bluntly with the first track ‘Wasted.’ The country-rock sounding tune has Macpherson singing about having a war inside her head and learning about what she’s not. The title track ‘Cowards’ seems to depict a relationship hitting rock bottom. Ballad ‘Get Out Now’ is like a pep talk with chorus lyrics, “Everything is straight forward when you’re walking toward it.” The overall mellow piano song builds to a bit of a surprise guitar solo that then ups the tempo giving the feeling things are improving.

Alt-country sounding track ‘Bad Fit’ is one of the standouts of the EP. Lyrically and melodically it’s arguably the best of the record.

The other standout track is the final song. ‘Treading Water’ is a piano ballad and, as a former piano player, I’m sucker for a good piano ballad. ‘Treading Water’ begins with a simple piano progression on an older sounding piano that repeats under gentle vocals from Macpherson like a calm ocean. The song then builds to drums and cymbals crashing in like strong waves.

The last two tracks at barely two and a half minutes each leave you wanting more. Not necessarily wanting the songs to be longer, but wanting there to be more songs.

Most of the songs in ‘Cowards’ were written while Macpherson was competing in Darcy’s Westshore ‘Victory to Vinyl – Solo Edition’ in November 2018, a battle of the bands style competition for solo musicians. Macpherson found inspiration watching fellow competitors perform. She ended up being awarded the $3000 grand prize that went towards recording the EP. Produced by her guitarist Christian Down, the EP was recorded at Down’s producer suite and at Infiniti Studios.

Steph Macpherson’s ‘Cowards’ EP will be released for digital download and streaming on Thursday September 19, 2019. Her EP Release Show will also be on September 19th be at Darcy’s Westshore with Victoria’s Jaimey Hamilton opening.

Below listen to an exclusive preview of the ‘Cowards’ EP and also audio of our interview with Steph when we sat down with her to talk about the EP over beers at The Drake Eatery in August.


VMS: It’s been four years since your last album ‘Stones’. Tell me about the new EP. It seems there’s a little bit of darkness in it.

SM: That’s funny because I think I’ve always been a bit of a brooding person. Like, friendly and bubbly, but I’ve got some dark depth in me. In a lot of my albums I have have had mostly sort of tortured sounding content in terms of lyrics that the production really just sort of made lighter somehow. I also once had a producer once say to me that I need to have a song on the album that was upbeat so I could give the listener an emotional break. So I had to come back to the table with another song, but I just didn’t do that this time. I just thought these are the songs that mean the most to me right now and I want to make them a reality.

VMS: The first song ‘Wasted’ starts right off without even an musical intro with “Everyday I wake up with a war inside my head…” which seems to describe the tone of the entire EP.

SM: That whole song within itself from start to finish was starting in the darkness and then finding their way out and that’s sort of been a bit of what the last four years have been like for me. I burned out in a lot of different ways and it took me a lot longer than I wanted to come back from that and then there was shame on top of that for taking so long and wasting all this time. I even seriously considered just trying to stop, but music is my catharsis so stopping isn’t really an option. I’ll still write no matter what I tell myself.

VMS: Is this EP a conversation to yourself?

SM: Oh yeah! Myself and anyone else who is going through a bit of a loss of direction. You’ve still got that fire in you and you know it’s there. It just takes time and effort to find it again.

VMS: There were a couple times listening to the songs where I felt like there was a positive Steph on your shoulder whispering in your ear, “Hey, don’t give up.”

SM: There’s a little bit of a devil/angel situation at all times for sure.

VMS: Tell me about the ghost hands on the EP cover.

SM: That was an adaptation of an idea I had about really liking the concept of a combination of the “See no evil. Hear no evil. Speak no evil.” situation as well as how we are kind of our own worst enemy and holding ourselves back. The hands are my own and I wanted to look somewhat strong and poised behind what was going on, but to be fighting through stifling myself because that’s what I’ve dealing with internally for a few years now.

VMS: It’s that devil and angel side with one side covering you and the other side being open.

SM: That too. There’s always just a part of you “But really? Can you do it? Probably not.” and the other have has to be kicking that to the curb.

VMS: How many songs did you have written before you decided on these five?

SM: I was pretty set on these five. I have a long of songs that I felt that weren’t quite finished yet that I’m sure I’ll come back to and develop. I also have a few songs pretty much to record again now, but I did the Victory to Vinyl – Solo Edition competition which is like a battle of the bands, but for solo artists through Darcy’s Westshore last November. I entered it because I was like, “uggh, why not?”. I had a couple of songs and song ideas, and then I wrote a bunch of them during that month because going out and seeing other solo artists just fighting with all their hearts to just be heard… The joy and the pride that was in everyone’s eyes and voices and faces, it was so cool and so inspiring.

VMS: It was a stacked lineup at the finals of the competition.

SM: Everyone was so good. I don’t envy those judges at all. It happened so quickly. Everything with this happened so quickly. Had a couple songs. Wrote a bunch of songs. Had a recording deadline. And now I’m releasing within a year. It kind of relit my fire too for creativity.

SM: We recording kind of all over the place actually. We did the drum tracks with Adam Sutherland at Infiniti Studios. Christian Down, my guitar player, produced the record and played most of the guitars on the record. We had Vince Vaccaro and Chris Lloyd guest on it as well. Lindsay Bryan leant some vocals and she also did the vocal editing and she’s incredible. We did most of the rest of the tracking at Christian’s producer suite. We also got our friend Ian Lougheed who is one of the original players in my band and I went to high school with him. We sent the tracks down to him where he lives just outside of San Francisco. He actually went out and bought the exact same audio gear that Christian has and tracked it from home there and sent it back to us. It was just such a cool collaboration.

VMS: You were one of the last artists to record at Infiniti Studios in Victoria before it had to close it’s Quadra Street location. How does that feel?

SM: Melancholy. You’ve probabably learned that I’m always melancholy a little bit. That’s where I’ve done at least a part of every record. I even added some vocals to my last record from Inifiniti. I know there are other studios in town, but it’s still going to feel strange not calling Adam up for that.

VMS: How did it compare recording the Cowards EP to being in Nashville recording your last record ‘Stones’?

SM: It was so different. It was industry veterens (in Nasvhille). It was still a home studio down there, but Nashville itself is so incredbiel as well. The home studio was super impressive. There was every guitar you could think of on the walls. He had beautiful program and outboard gear. The energy was a lot different. Every single day was music. You get up, you go to the studio, you get up, you write something, you go to the studio. That was really cool, but this was really cool too. We could take a little more time with things because we weren’t relying on a set week-long period of time to get everything done. We really got to play with our friends and that was really cool. They were both great, just different great, and this is exactly what I wanted right now.

SM: They are pretty much all rock players.

VMS: Even in the slower songs, you have Christian doing a guitar solo (on ‘Get Out Now’)

SM: Yes! He was really reluctant to do that actually. For the piano ballad ‘Treading Water’ everyone when we went into the studio was like, “Okay sooo… solo piano song?” and I was like, “Hell no! I want drums, I want no drums in this part, and then I want I want them to come CRASHING in like everything’s falling around you.” And I was like, “This space right here? Put something there.” I like that there’s still space in the songs, but there’s something to carry through it in everything.

VMS: Speaking of piano, can people expect you to see you playing piano live anytime soon?

SM: Yeah. We’re doing the album release at Darcy’s Westshore September 19th and I’m probably going to be playing mostly keys at that show. I’ll be bringing some of the keys elements from the other albums as well.

VMS: What else is coming up next for you?

SM: I’m working on some shows for later in the fall for the island and mainland. I’m also doing a VIA Rail ‘Artist on Board’ program trip from Vancouver out to Toronto in October and playing some shows out in Toronto and Ontario and Montreal areas in late OCtober as well.