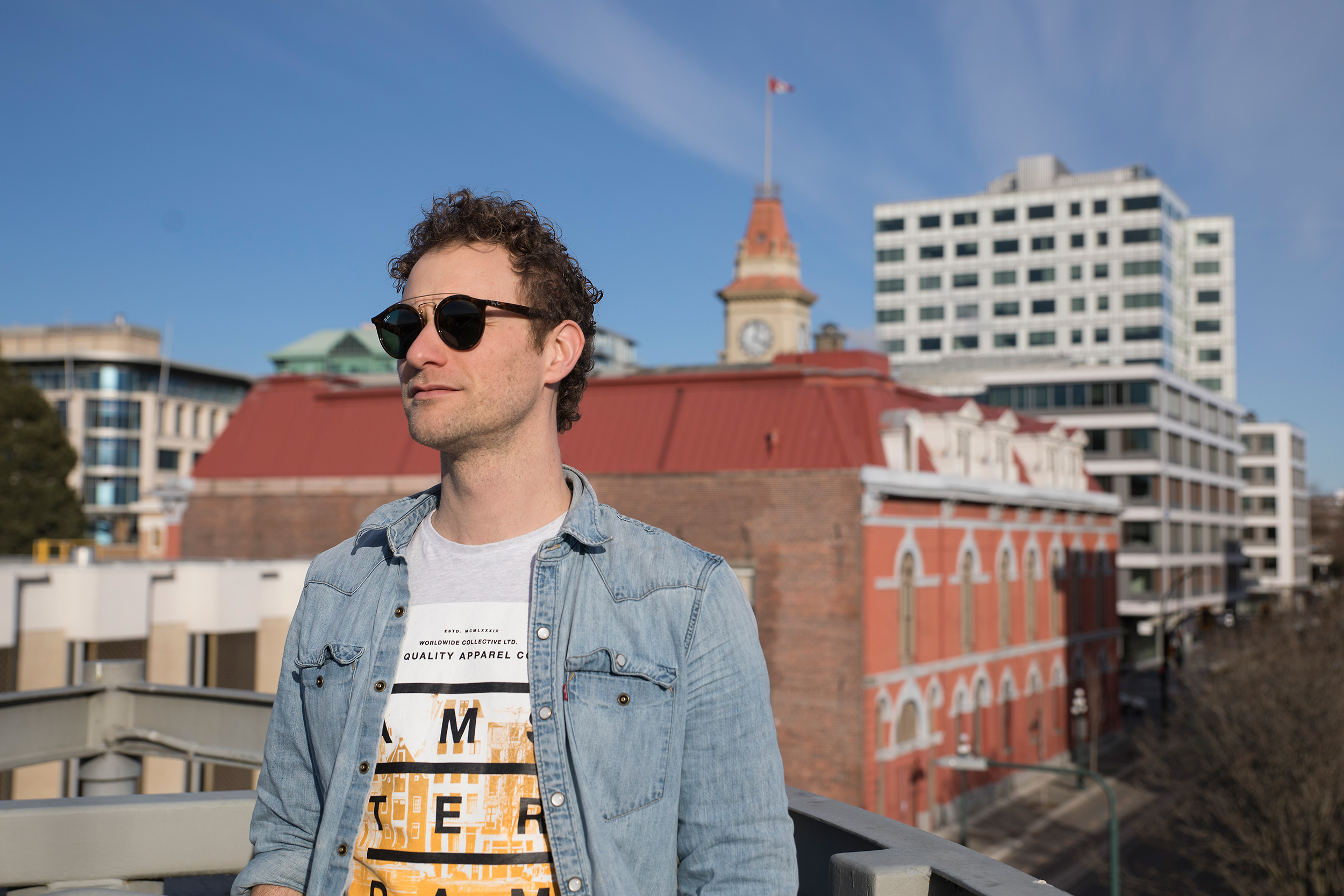 Victoria’s Adrian Chalifour has been a performer for 15 years. Since 2012 he’s been the front man of Towers and Trees a local band that’s sold out venues, performed festivals and received significant radio airplay off singles such as ‘Montreal’ and ‘Bad Heart.’ Wednesday he takes a solo shot at stardom when he’s featured in the season finale of CTV’s The Launch.

The series shows five emerging artists each episode auditioning in front of of a panel of celebrity and music producers for a chance to record and perform an original song. Two get chosen to record the song, but only one version is released to the public and radio stations across the country.

We met up with Adrian over the weekend to get a sneak peak at his experience on the show as one of five artists hoping to be “launched.”

What made you apply for the show?
I started following the launch in season one watching a good friend of mine JP Maurice compete on the show and I really like the format of the show. I think it’s a cool, fresh take that seems really relevant and pertinent in 2019 with the move towards singles and frankly I was looking to shake things up and do something outside the box and I’d never tried out for something like this before so why not throw my name in the hat. 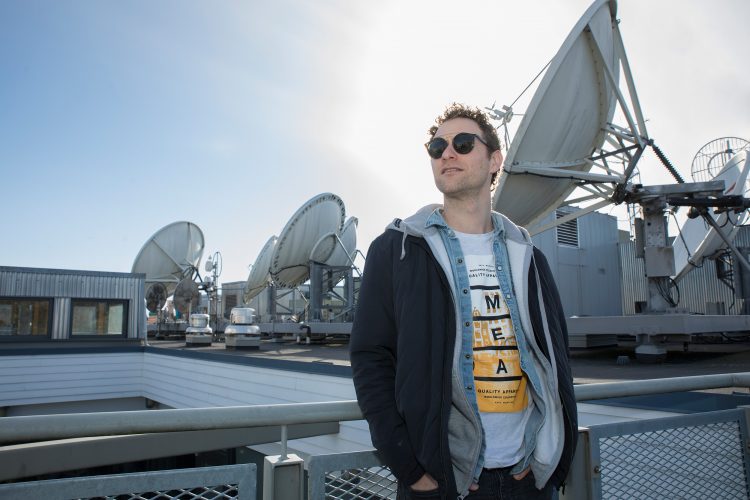 Tell me about your experience with the mentors
I think one of the coolest things about season two of The Launch is that they’ve knocked it out of the park with their celebrity mentors. The opportunity for me personally to go and audition in front of Nile Rogers who’s like a living legend and Bebe Rexha who is just this pop sensation and of course Scott Borchetta who discovered Taylor Swift. How can it be anything other than surreal?

What was cool is that maybe because I’ve been doing this long enough, I’m not sure, but when I actually got to stand in there and do the audition I felt pretty relaxed. It’s also a credit to them. They’re super supportive and super interested in lifting you up and seeing the best of what you have to offer. So I just tried to roll with it and have fun, and yeah, it was great.

There’s so much music out there. There’s so many artists and there are so many platforms that, more than anything, I think what matters from industry and ultimately to fans is they’re looking for someone who’s real. I thought it was very cool because you’re standing in front of these massive people who know all about how the industry works and what they’re telling you is, “Just show us who you are. Show us what your gift is. What makes your gift special.” And that was a real affirming thing.

I think if you’re an artist who hasn’t had that massive breakthrough success, it’s easy as you get on in life to start to question, “Is what I have that special? Am I going anywhere?” I don’t know what better affirmation you could get than having Nile Rogers tell you you’ve got a great voice or tell you that he really loves the story you’re telling in your song.


How much time did you spend with the mentors?
You actually get to hang out with them for quite a while, almost an hour. It’s a legitimate hangout and you’re playing a number of songs and after every song they’re talking to you about your performance. They’re asking questions on why you chose that song? They’re getting to know who you are. It was very comfortable and wasn’t some quick rushy thing. I really just got to sit and hang out with them for an hour.

How many songs did you have to perform?
For the audition process they ask you for a selection of originals and covers. They’re looking for songs that mean something to you personally and something that showcases the best you have to offer musically. Some of them I performed with the house band which was a crazy experience in of itself. Basically, you get half-an-hour to hangout and rehearse with the house band and within ten minutes they’re playing all of the songs you brought flawlessly.


Has it been hard keeping the outcome of the episode a secret?
I don’t play poker because I don’t have a poker face. I can’t lie. I can’t keep secrets. So my strategy for keeping the outcome a secret has been to not talk to people. People do reach out, they do ask. I’ve made a lot of use of the zippy mouth emoji when I reply to texts and when I’m hanging out in person and people ask me about it, I just have to look the other way and say let’s talk about something else.
Why did you apply to be on The Launch?
I noticed they started accepting applications for The Launch last summer and I thought long and hard whether to apply. Probably the biggest thing that’s happened in my life in the last couple years is that I became a dad. I think becoming a parent makes you really come to face with what you value and what your beliefs are because you start thinking about what you want to say to your child as they’re growing up. So I started thinking long and hard about these things I feel like I believe like, “Hey if you’ve got a dream or if you’ve got a gift you should pursue that. You should work hard. I believe you can do it. I believe you can make it.” And I started thinking if I gave myself that same advice, do I feel like I’ve been following that?

I look at where I’ve gone with music in the last few years, I’ve worked very hard. But have I taken every risk I can? Have I put my best foot forward in every possible situation, I don’t know. So I looked at this opportunity with The Launch and I thought why wouldn’t I take the risk and throw my hat it that ring? What do I have to lose? And what do I have to gain in terms of being able to demonstrate some things I think I believe in to my daughter?

I dedicated that whole experience (at The Launch) to her and I hope I came away with something that she’ll one day be proud of.

If you win on Wednesday and are “launched” what does that mean for Towers and Trees
It’s definitely something I spoke about with the guys in the band. It could change everything. Honestly, I kind of think it changes things whether I’m launched or not just in the sense that it’s a crossroad and it’s a new branch. It’s putting my name out there in a pretty big way, in a way I haven’t before.

I think we have a benefit with this group. We’ve been around for between six and seven years and as much as we’ve been able to do a lot of cool things and we’re all very proud of the audience we’ve built and the music that we’ve put out, there’s been these glass ceilings over our success and what we’ve been able to do with the band.

So I think for all of us there was this sense of if any one of us has an opportunity to do something cool and new, what position would any of us be in to say, “No, don’t do that.” I think my favourite quote was from (Towers and Trees guitarist) Dave Zellinsky when he said, “I think I’ll punch you in the nose if you don’t do it.”

There’s a lot of big question marks about how we adjust and what we do after this whether I’m launched or not. But I think six or seven years into a journey as a band, if you’re not asking those kind of tough questions, then you’re likely settling for something.


Tell me about the other artists competing in the episode
I’ve done enough music contests now, that I don’t view any of the other artists in competitions as competitors because I just don’t think artists make good competitors. I think we’re artists more than anything. So I went in there with the most collaborative mindset possible.

There was this guy named Del Hartley from Toronto, an incredible R&B artist. Michelle Treacy from Ottawa. She was in a viral video because she went up on stage and sang with Lady Gaga when she was 14 or something like that and it got millions of views. There was Sarah Carmosino from just outside of Toronto and a gal named WILL from Toronto, another incredible R&B artist.

I’ve been able to do a couple collaborative things with them. Me and Michelle sang a song together that hopefully I’ll be able to share. Me and Del just grabbed a beer after the shoot. I think these are all just potential connections. They’ll never really be competitors. They’re people I want to stay in touch with and collaborate with.

Most of them are just crushing it on social media. I don’t have 30,000 followers like they do, so there’s a lot I can learn from that. The other thing that’s cool is that all 30 of us that took part in the six episodes have this private DM chat going where we all keep in touch and share stories. It’s a cool community. I’ve only met the four of them in person, but there’s a cool sense of kinship and bond. And every episode somebody is launched, somebody’s a winner. The rest aren’t winners, and yet even in that DM it’s all just love and congratulations. We all know that this is a stepping stone for every person whether they’re launched or not.

With the auditions lasting an hour each, that must have meant a lot of time spent watching the show get shot.
The actual shooting of each episode is a marathon for every single artist involve. I can’t imagine the process of being those editors and taking all of that footage that they’ve got of every one of us and taking it down to a cohesive episode. Those people are incredible. I have nothing but respect for them. Every one of us poured a lot into that show. It was a very cool experience. 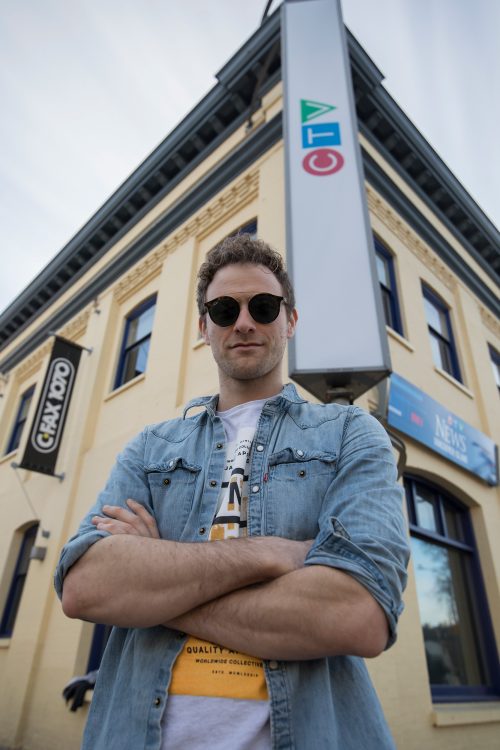 The season finale of The Launch airs Wednesday at 8pm on CTV and will also be available for streaming on the the show’s website. Will Adrian be chosen to record the song and be launched? Tune in to find out.

A feature on Adrian is also posted at CTV Vancouver Island.

Update: Adrian unfortunately was not chosen to record the song ‘Emotional’, but during the judges deliberation after all 5 artists auditions were complete, Nile Rodgers had this to say about Adrian.

“John Mayer is my friend, don’t take me wrong. He (Adrian Chalifour) actually has a better voice than John Mayer. He does.” – Nile Rodgers