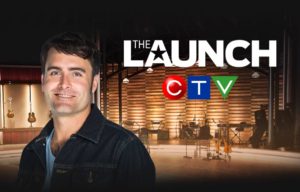 Victoria’s JP Maurice has been announced as an artist who will compete in a new six-part music television series, ‘The Launch.’

The premise of the new music competition reality show is that a group of unsigned musicians are mentored in the creation of a new original song by a panel of internationally renowned hit makers. The mentors include record executive Scott Borchetta who is best know for founding founding Big Machine Label Group and for discovering Taylor Swift. Also on the mentors list are Shania Twain, Alessia Cara, Boy George, Ryan Tedder, Fergie, Stephan Moccio, Ian Kirkpatrick, Jennifer Nettles, busbee, Julia Michaes, Nikki Sixx and Dann Huff.

A total of 20 artists/bands from across Canada have been announced for the competition in the last two days. Other local BC artists in the cast include Salt Sprint Island’s Nicky Mackenzie and North Vancouver’s Sons of Daughters

The Launch will premiere on CTV in January 2018.