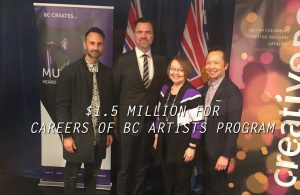 At a media conference streamed on Facebook Feburary 7, 2017, BC Minister of Jobs, Tourism and Skills Training and Minister Responsible for Labour Shirley Bond and Creative BC announced $1.5-million in funding for a Careers of BC Artists Program.

The fund will be the marketing arm for creation of music videos, electronic press kits, photography, websites and promotional campaigns with the goal of telling the world about great BC artists. Applications will be open to music companies and artist entrepreneurs.

Applicactions for the program will be accepted March 1, 2017 with the first deadline being May 1, 2017. A second intake of applications will happen in the fall of 2017.

The Careers of BC Artists Program is the 5th program to launch as part of the $15 million BC Music Fund announced last year. In total, the BC Music Fund fund will support seven programs, including Sound Recording, Live Music, Industry Initiatives, Research, Careers of B.C. Artists, Music Company Development, and Innovation.

More information about the new program can be found at bcmusicfund.com

To see the funding announcement and Rococod’s performance, watch the embedded Facebook video below.