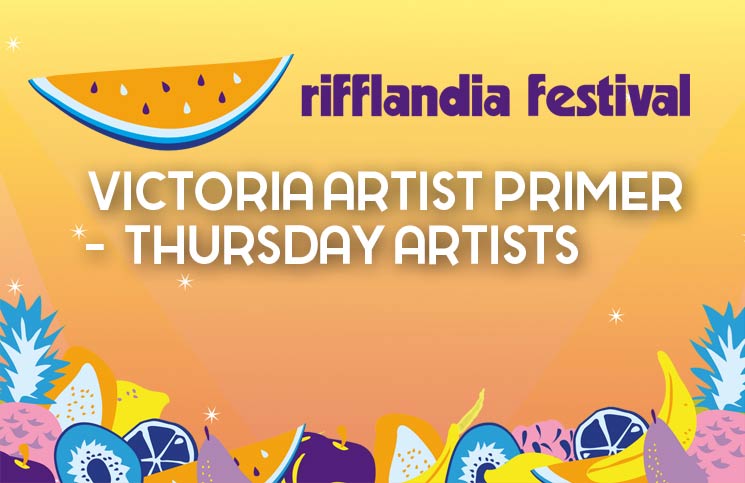 With more than 160 performers and 19 venues to choose from, picking what artists to research or check out can be a daunting endeavour. We’re not going to tell you who to see, we’re just here to let you know who’s from Victoria or has roots in Victoria. There is a good chance we missed a couple artists with Victoria connections. If we have, let us know. This is your Rifflandia 2015 Victoria Artist Primer for acts performing on Thursday September 17, 2015.

Ticket details can be found at Rifflandia.com

8:30pm
Rugged Uncle at Copper Owl – Rugged Uncle are Rifflandia vets dating back to the very first year of the festival. Lead singer Brooke Gallupe and bassist Luke Kozlowski were members of Victoria indie band Immaculate Machine. Below is a video of Rugged Uncle performing at Logan’s Pub back in March.

ROCOCODE at The Sunset Room – ROCOCODE are an indie pop duo based out of Vancouver. Laura Smith grew up in Victoria. In 2012 they were a Zone Band of The Month and Rifflandia 2015 will be their third appearance at the festival. Below is ROCOCODE performing one of their better known singles ‘Empire’ from Rifflandia 2014.

Leeroy Stagger at The Duke Saloon – Alt-country singer Leeroy Stagger was born in Victoria, but currently resides in Alberta. He is a former Zone Band of The Month Dating all the way back to 2003. Below is video of him performing on Canada Day in 2012.

9:30pm
Blackwood Kings at Studio CMCT – Blackwood Kings are named after the street corner of Victoria where the band rehearses. Their music’s foundation is base don ska, reggae and dub. Below is a video of them covering the Flight of The Conchords at Copper Owl.

Sam Weber at Victoria Event Centre – Sam Weber has been everywhere in the Victoria Music Scene the last few years whether it has been as a producer, a guitarist in other bands or performing his own music. Below is him performing at Upstairs Cabaret in 2013

Stray Cougar at Sunset Room – Stray Cougar are a rock band from Victoria. Below is a video of them performing at Lucky Bar in March.

10:30
Acres of Lions at Fort Techtoria – This is the first of two sets for Victoria pop rock band Acres of Lions after a bit of a hiatus. From what we’ve read this first set will be with their current drummer Shane Deyotte featuring new music. Their second set on Saturday at Studio CMCT will feature original drummer Lewis Carter for a throwback performance. Below is video of their performance at Upstairs Cabaret for the 2014 TD Victoria International Jazz Fest.

Max Renn at Lucky Bar – Max Renn is the pseudonym of Cory Arnold from Victoria. His music “focuses primarily on delivering all-analog hardware sets of gritty, tape-saturated techno, inspired by the late 80’s era of EBM and Belgian new beat.” Other than that info on his Rifflandia bio, we can’t find any other info about his music online.

11:30pm
Isobel Trigger at Fort Techtoria: This will be the first of two sets at Rifflandia for Isobel Trigger and will be the last performances for a while as they will be going on an extended hiatus from performing to record their next album. A 2014 Zone Band of The Month, Isobel Trigger give high energy performances with each band member commanding your attention with their stage presence. Below is video from their CD Release Show at Distrikt Nightclub in August 2014

Spaceboots at Anian – Spaceboots are a party rock band from Victoria. If you go to their set. Be prepared. Things can get a little crazy and that’s a good thing. Below is video from their performance at the Victoria Event Centre for Victoria Ska Fest 2014.

LABS at Copper Owl – LABS stands for “Lindsay Adam Bryan Sutherland”. It’s an electro pop project by Lindsay Bryan and Adam Sutherland both of which are part of local cover band The Brightside. This will be the first live performance for LABS. Below is the first track they released on soundcloud.

Fish & Bird at Wood Hall – Fish & Bird are a folk band originally from Victoria. This is the first of two sets they are performing at Rifflandia. The second will be at Northern Quarter on Friday. Below is a video the band posted of a performance in Boston in 2012

12:15am
Steph Macpherson at The Duke Saloon – Steph Macpherson is about to release a new album she recorded in Nashville with record producer and member of Blackie & The Roadio Kings, Colin Linden. Linden heard one of Steph’s songs on the radio and contacted her asking to be part of her next album. Below is video of Steph Macpherson playing a newer tune at The Mint in May of this year.

12:30am
Frog Eyes at The Metro Theatre – Frog Eyes is an indie rock band from Victoria and just released their 6th studio album on August 28th. Below is a recent performance we found from August 2015.

Mike Edel at Studio CMCT – Mike Edel is a Victoria folk/rock singer, a former Zone Band of The Month and is currently in his second stint competing in the Peak Performance Project. He released his latest album ‘India, Seattle’ in Canada this past spring and is set to release it in the U.S. on October 16, 2015. Below is him performing at The Roxy Theatre in April 2015.

Carmanah at Copper Owl – Carmanah are a west coast roots band form Victoria. They released their latest EP ‘Roots’ for free download in June. Below is a video from Carmanah’s performance at Rock of The Woods 2015 in July.