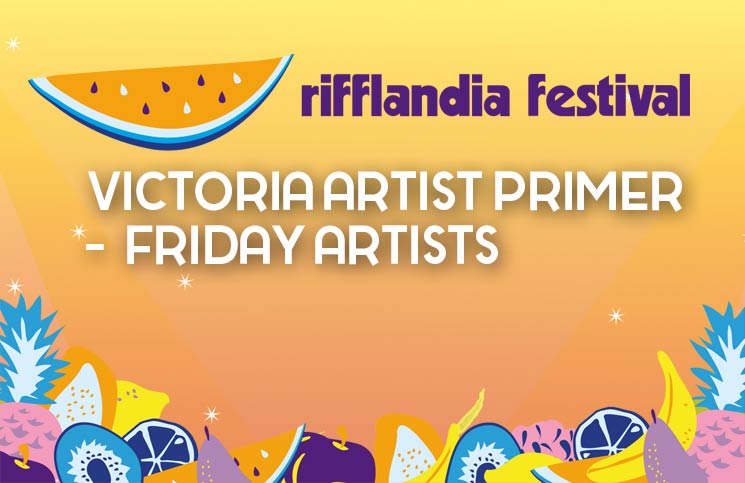 With more than 180 performers and 19 venues to choose from, picking what artists to research or check out can be a daunting endeavour. We’re not going to tell you who to see, we’re just here to let you know who’s from Victoria or has roots in Victoria. There is a good chance we missed a couple artists with Victoria connections. If we have, let us know. This is your Rifflandia 2015 Victoria Artist Primer for acts performing on Friday September 18, 2015.

Ticket details can be found at Rifflandia.com

8pm
DJ Shrew at Capital Iron – DJ Shrew (aka Andrew Sherry) can often be found on stage at Lucky Bar’s Solid Saturdays. Unfortunately we can’t find any online examples of his sets.

8:30pm
Fish & Bird at Northern Quarter – Fish & Bird are a folk band originally from Victoria. This is the second set they are performing at Rifflandia. They first play at the Wood Hall on Thursday. Below is a video the band posted of a performance in Boston in 2012

The Stockers at Victoria Event Centre – The Stockers are a Victoria punk rock band and a 2015 Zone Band of The Month. We weren’t able to find any live footage of The Stockers, but here’s a track off their album on Bandcamp.

9:30pm
Carmanah at Anian – Carmanah are a west coast roots band form Victoria. They released their latest EP ‘Roots’ for free download in June. This is the second set they will perform at Rifflandai 2015. Their first performance is on Thursday at Copper Owl. Below is a video from Carmanah’s performance at Rock of The Woods 2015 in July.

Class of 1984 at Victoria Event Centre – Class of 1984 are a punk band from Victoria. The band features skateboarding advocate and former tv personality Jake Warren. Below is a video of Class of 1984 performing at Logan’s Pub in 2012.

Big Body at Lucky Bar – Big Body (aka Ian Hoar) is a Victoria DJ and former candidate for Victoria city council. Below is a one hour mix on his soundcloud.

Phrase at Wolf/Sheep – Phrase (aka Fraser Evans) is a Victoria based DJ. Below is an example track from his Soundcloud.

Towers and Trees at Alix Goolden Hall – Towers and Trees are a folk/rock band from Victoria widely known for their single ‘Montreal’. They’re a former Zone Band of The Month and will be releasing their first full length album in October. They will be performing twice at Rifflandia 2015. Their second set will be at Royal Athletic Park on Sunday. Below is a video of them performing at the BC Legislature for Canada Day 2014.

Sam Weber at Studio CMCT – Sam Weber has been everywhere in the Victoria Music Scene the last few years whether it has been as a producer, a guitarist in other bands or performing his own music. This is the second set Sam Weber is performing at Rifflandia 2015. His first set is Thursday at Victoria Event Centre. Below is him performing at Upstairs Cabaret in 2013

The New Groovement at Sunset Room: The New Groovement are an 11-piece funk, hip-hop, soul group from Victoria. They just finished a stint as Zone Band of The Month and are set to release their first full length album in October. This is the first of two sets they will perform at Riflandia 2015. They also The Phillips Backyard on Saturday. Below is a video of The New Groovement performing at Distrikt Nightclub for Garden City Grooves 2014.

11:30pm
Weird Party at Copper Owl – Weird Party an instrumental Jazz funk band from Victoria. Below is a video of Weird Party performing at Studio CMCT’s ‘Rifflandia After Dark’ during Rifflandia 2014.

Mr. Moe at Wolf/Sheep – Mr. Moe is a Victoria DJ. Below is a sample mix on his Mixcloud.

DJ Murge at Distrikt Nightclub – DJ Murge is a Victoria DJ. Below is video of DJ Murge performing in between bands at V.I.C. Fest 2014.

12:30am
The Archers at Studio CMCT – The Archers are a folk/rock band from Victoria. It was recently announced that this Rifflandia set will be The Archers final farewell performance after 5+ years as a band. Below is The Archers performing at Fairfield United Church in June of 2014.

LIINKS at Sunset Room – LIINKS are an Electro Pop duo consisting of Georgia Murray and DJ DWhiz from Victoria. For most of 2015 they have been recording in California. Now they’re back armed with new music. Below is their first single that got radio airplay ‘The Break’ on their Soundcloud.