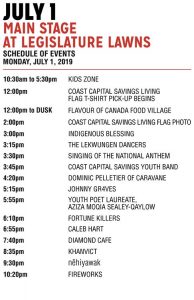 Atomique Productions has announced the entertainment lineup and schedule for the 2019 Victoria Canada Day celebrations at the Legislature lawns Monday July 1, 2019.

Thousands are expected to attend to see the yearly Canada Day fireworks.

Edmonton’s nêhiyawak will headlines a diverse group of performers. The indigenous indie-rock trio blends traditional and contemporary music and last year were named ‘Group of The Year’ at the Edmonton Music Awards. Surrey DJ Khanvict will perform a mix elements of Bollywood, Sufi and Panjabi music with bass, moonbahton and trap. Victoria’s Diamond Cafe brings some funk and R&B while Caleb Hart adds some reggae and soul. Fortune Killers return from nearly a year long break to rock out on the main stage. Johnny Gr4ves adds a pop/R&B element and Dominic Pelletier of Quebec City band Caravane brings some French flavour to the festivities. Coast Capital Savings will be presenting the winners of a youth band contest still to be named. Last year, Jaimey Hamilton won the opportunity to perform at the time slot.

Opening the main stage will be an indigenous blessing followed by The Lekwungen Dancers. Like every year, the event will feature a kids zone a ‘food village’ and participation in a living flag photo.