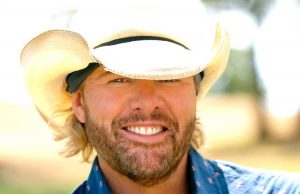 “Toby Keith is a country music legend, hugely popular amongst long time country fans and new ones alike,” said Greg Adams, Executive Producer of Sunfest Country Music Festival. “Toby has been on our radar for many years and we’re finally able to say that he’s coming to Sunfest.”

Tickets for Sunfest Country Music Festival 2017 are on sale now at sunfestconcerts.com