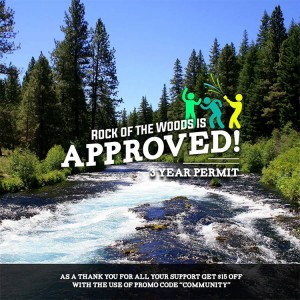 The property where the festival has been held the last two years is zoned residential, so a special event permit was required. Rock of The Woods applied for a three year Temporary Use Permit in August 2015. Over the last five months the festival presented its plans in a a public meeting in October 2015 and the proposal went through a public comment period. Some neighbours of the property spoke against the permit raising concerts about environmental impact, traffic and noise, but the majority of feedback was in support.

Going into its sixth year, Rock of The Woods 2016 will happen at the Lazy River Ranch in the Cowichan Valley Thursday July 21 to Sunday July 24, 2016. The lineup is still to be announced. To celebrate the permit approval, the Rock of The Woods is offering $15 off festival passes for a limited time.