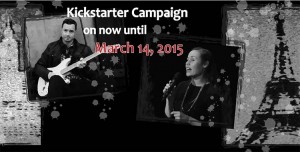 Victoria musicians Danton Jay and Heather Lynn have launched a Kickstarter campaign to raise $7000 to complete a “funky, catchy, and sustainability themed album with a climate outreach agenda.” The album will be called ‘Decades after Paris’ and will take the listener on a journey starting from the Peoples Climate March in New York City to Paris in December of 2015 to witness world leaders make decisions on global carbon emissions, and the general fate of humanity.

Perks for helping fund the project include the usual digital downloads and CDs all the way to a full concert with a 7 piece band.

For full details on the album project or to contribute to Danton Jay and Heather Lynn’s campaign, CLICK HERE.