Home News Interviews Interview: Glaring Mortality at Every Corner – An interview with West My... 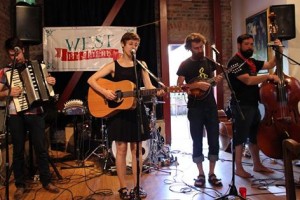 I caught up with West My Friend, or most of them anyway, at the tail end of a practice. They were rehearsing for an appearance that night at the Solstice Café, a concert that I was lucky enough to catch. Bass player Adam Bailey was sick that day, but I chatted with Eden Oliver (vocals, acoustic guitar), Alex Rempel (mandolin, vocals) and Jeff Poynter (accordion, vocals):

WHAT IS WEST MY FRIEND ALL ABOUT?

EO: We like having a band that plays acoustically, which focuses on the timbre of the instruments and how they combine in complex ways. It’s not a traditional group of instruments. It’s not what you’d expect. A lot of people look at our line-up and think ‘blue-grass’ but it’s not.
JP: Someone said we were a pop band disguised as a folk band. But it’s really not pop.

EO: No, it’s quirkier than pop. Quirky. That term is haunting us.

HOW DID YOU GET TOGETHER?

JP: Both bands came to an end at the same time. So we were all sort of looking for a new band, without knowing it. It came to us in a dream.

EO: There was originally another female singer-songwriter, but she eventually left to join a funk band. So we picked up a bass player and then solidified our sound. We each picked one instrument and focused on it, because sound guys hated it when we came on stage with our gazillion instruments.

JP: Yeah, also it was difficult for us to get to shows because none of us owns a car. So we would have to buck all these instruments.

AR: We have to be or else we’d be screwed.

EO: Yes, [laughs] or else we’d be a bass, saxophone and flute pop band.

AR: I don’t know that I’d even wanna go see that! We wouldn’t enjoy it as much. I’m not into that personally.

DID YOUR MUSIC EVOLVE NATURALLY?

JP: Yes. We’ve never sat down and said, “This is the sonic direction we want to go in.” It just happened.

EO: At first we definitely experimented quite a bit, but for the last three years or so we’ve been operating from the same basis. Not that we’ve made a decision that it has to be this.

AR: I feel like we’ve got to the point where we think, “This is nice. I really like the stuff we’re making now.”

JP: It’s hard to define the genre though.

EO: Yeah, there’s jazz and classical. Funk. A blue-grass influence. I listen to a lot of indie.

AR: We’re like a big crock-pot that’s been going for a few years. The potatoes were all hard and weird at first, but then you come back about a week later and, hey, how about that?

JP: Recording has helped us with our sound, because when you sit down to record you have to go, “OK, how do we want this to sound?”.

EO: Yes, and it’s helped with the arrangement of the parts. How the four voices of our instruments interact. It’s gotten more complex.

AR: Adrian and Joby [producers Adrian Dolan and Joby Baker] have certainly helped with where our music’s going. We are now more conscious of how we are putting songs together. There is certainly still a jammy aspect when we first start a song but when we are live we are not a jam band. That’s because when we are writing a song we are thinking about how these lines fit together.

JP: We play festivals and quite often a whole group of musicians get together and just play. Some bands, their music is good to jam to, but ours…

EO: [Laughs] No one wants to play our songs.

JP: They’re both good kinds of music. Our music just too unpredictable, I guess.

AR: We can be a bit esoteric at times.

WAS THERE ANY CHANGE FROM THE FIRST ALBUM TO THE SECOND ALBUM?

EO: We’ve added brass. Trumpet, trombone. Also, on one song there is a mini orchestra.

JP: The songwriting is more mature. In the past couple of years we’ve tightened up more. This is album is more cohesive.

AR: We’ve just been writing more material. When you write more you get a better idea of what works and what doesn’t work. The whole process was more intentional this time. From what I recall of that blurred several months.

JP: We always allow lots of time for these things, but once you get there it’s not enough time.

IN THE SONG “WHEN THE INK DRIES” THERE IS A CAUTIONARY MESSAGE. IS THIS SOMETHING NEW TO YOUR MUSIC?

EO: We are all socially conscious and that inevitably comes out.

EO: Some of it is celebratory, like “The Cat Lady Song”. Part of developing as a songwriter for me has been learning how to write about things that I care about without being preachy or being corny.

AR: In terms of the songs having a social conscience I think I am doing that more. I don’t necessarily think that I have to make a statement, but everyone has a position or a point of view but not everyone gets the chance to put them out there or have them heard, so I think there is some sense of obligation that I have this opportunity then I should use it, at least some of the time, to say what I think ought to be said. But not too “up front”.

EO: Or forget about the music. That’s the way I look at it, I’m still making music. I’m not here to stand on a soapbox. We like music.

JP: We do it because we love music, not to get a message
across.

JP: The unconventionality of it. Some people say they weren’t a fan the album the first time they heard it, but after two or three listens they got into it way more.

AR: What did the BBC in Scotland say, “If it’s not too convoluted for its own good, it might just catch on”?

EO: Yes, that’s what they said about “The Cat Lady Song”.

JP: That’s the thing, it may take repeated listens before people like it.

THE FUTURE, WHERE ARE YOU GUYS GOING FROM HERE?

AR: More shows, better shows. That seems to be the mantra with the band.

JP: More “listening” audiences, not so much bar audiences. We may still do one or two bar dates on tour, because they’re fun and we need to fill those dates, but our preference is definitely, you know, sit down and hear. We are also spending more time touring this year. Hopefully get to the UK.

AR: We are getting to the point where we’re thinking, “Oh, man, this could be a viable full-time thing.” Which would be awesome. For me it is just the best time of the year when we get to go on tour.

JP: We are just now starting to pay ourselves back after almost five years. In the past we were paying off an album or paying off expenses. So for the future, yeah, making it more of a career.

EO: We’re doing more stuff with schools too. It’s nice to bring our music into schools and do workshops. Our music is from the “real” world. It’s not kids’ music, but kids like it. It’s mostly songwriting workshops. In one school we actually taught them one of our songs.

JP: There was one guitar class and a choir, so there was like 30 guitars and 30 singers doing our songs.

EO: It was awesome! [Laughs] It was so metal.

AR: For me, the music that I am writing now is what this band wants to play. So, yeah, let’s keep doing it.

AR: Do you know anyone who’s selling a van that’s already converted to biodiesel?

EO: So far we’ve always borrowed or rented a van. We all bike. In fact, we are going on a biking tour end of August. We taking our instruments and gear with us. It’s all farms and breweries. Up to Nanaimo and the Gulf Islands. Obviously, in future we will do tours with vehicles and so we’re trying to find more sustainable ways to do that. We did a public transit tour once!