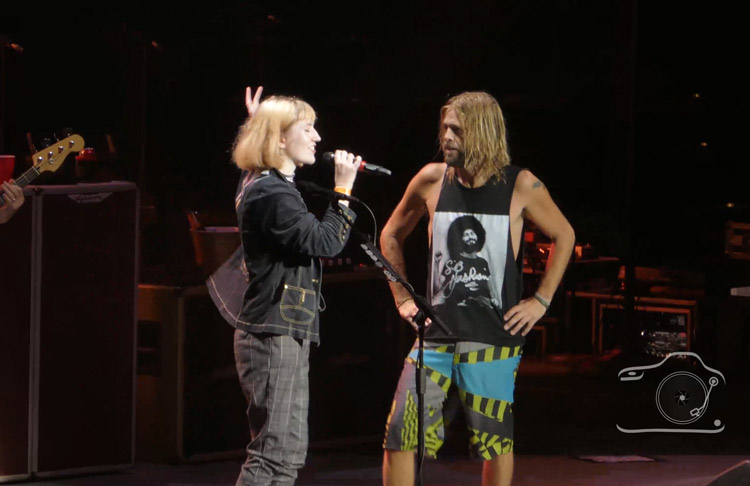 In what’s being described as the best night of her life, Port Alberni teen Madi Duncan was pulled from the audience to sing on stage with Foo Fighters at Rogers Arena in Vancouver Saturday.

Madi Duncan, 16, was standing front row in the crowd when the Foo Fighters’ Dave Grohl announced it was time for drummer Taylor Hawkins to sing a song. Hawkins and Grohl then started pointing into the crowd and invited “The girl with the Queen shirt” (Duncan) on stage to sing Queen/David Bowie’s ‘Under Pressure.’ Dave Grohl took over on drums for the song.

Duncan later posted about her experience on Instagram saying she had no clue that it was going to happen and described how Foo Fighters’ music has helped her with her struggles with mental illness.

OH. MY. GOD. I just got to sing with my absolute favourite band in the world. I'm only sixteen and I got to meet my heroes. I got to duet with Taylor Hawkins (even with me having a cold!) WOW!! I am extraordinarily grateful for this amazing opportunity. I had no clue that it was even gonna happen. I didn't think it was gonna happen. But it was a huge accomplishment for myself in a way that you might not expect. A lot of people are aware (or maybe not) of my struggles with mental illness and have been very supportive of me throughout it all, but something that you may not know is how much Foo Fighters helped my younger self during the worst time of my life. Essentially, I can sincerely say that without them I wouldn't be who I am today, in fact I wouldn't be here today. So getting to sing with the band that helped me save myself was such a dream come true, and I feel like it's a bit of closure to my dark past. So once again, thank you to these six extraordinary guys. I can't stop crying. Thank you Foo, I wouldn't be here if it weren't for you. (Also if anyone got any cool pics tag me!!) #foofighters #foofightersvancouver2018 #foofightersvancouver #davegrohl #taylorhawkins #queen #davidbowie #underpressure #freddiemercury #foo #rocknroll #music #band #rogersarena #dreamscometrue #stadium #foofightersfan #fanonstage #davegrohlfan #singer #musician #healing #chrisshiflett #natemendel #ramijaffee #patsmear

Foo Fighters also brought up superfan Roxanne Engli of Kamloops on stage as well. She reportedly has attended every Foo Fighters Vancouver show and according to her Twitter profile, was going to be attending the postponed Edmonton and Calgary dates too.

Check out video of Madi Duncan’s performance below.