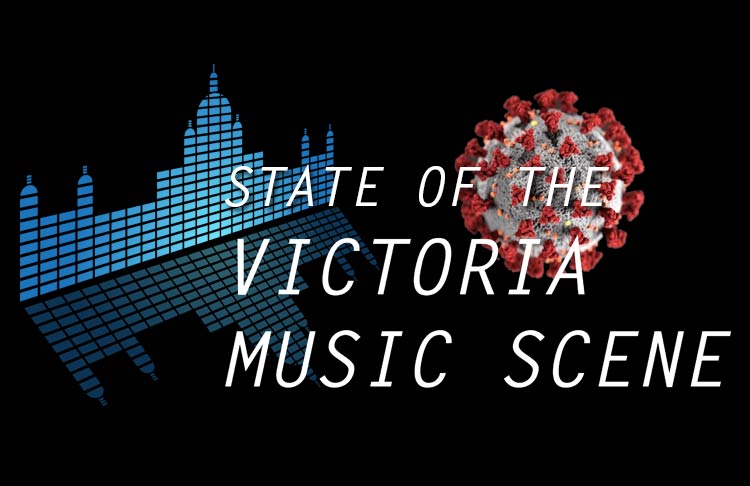 UPDATE March 17: We’ve been trying for the last few days to keep up with what’s happening at various venues. At this point we think it’s pretty safe to say that every venue that hosts music events is closed until further notice.
————————————————

The spread of the COVID-19 virus around the world has resulted in a whirlwind of event cancellations this week. Major festivals such as Coachella and South By Southwest have cancelled or postponed. The major sports leagues have suspended their seasons. Seattle has banned social gatherings of 50 or more people.

Thursday afternoon, the BC Government and BC health officials announced a ban of social gatherings of 250 or more people effective immediately. What does this mean for live music in Victoria? Here is what we know so far.

The Royal Theatre and McPherson Playhouse have closed until further notice. All ticket buyers of affected shows will be contacted in the coming days by phone or email. The box office will remain open Monday to Saturday. They have also set up a page with daily updates. 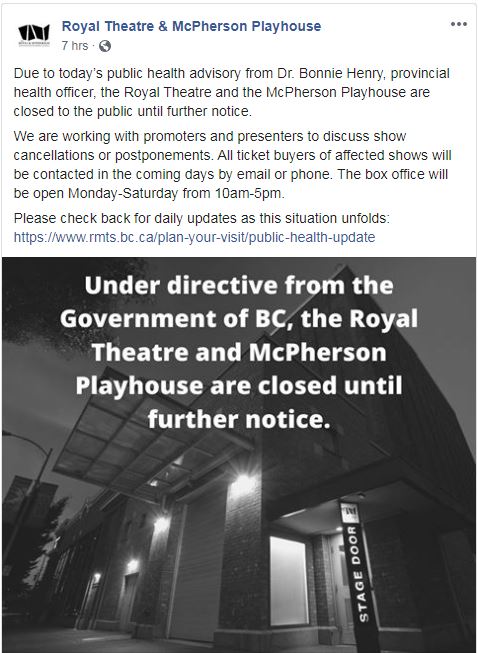 Prior to the Royal and Mcpherson closing, the Victoria Symphony announced that they are suspending all concerts until further notice. 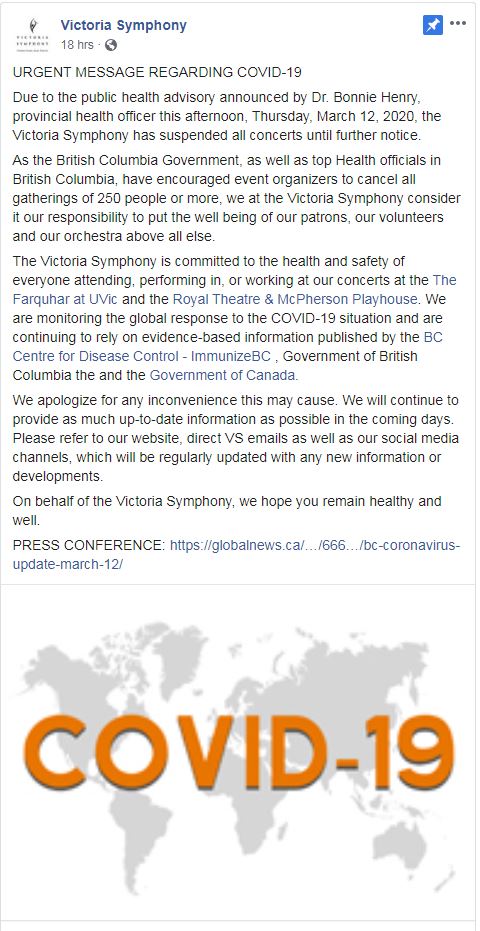 Vinyl Envy After initially announcing that they would continue to host concerts, staff at Vinyl Envy have decided to postpone shows for the remainder of March. 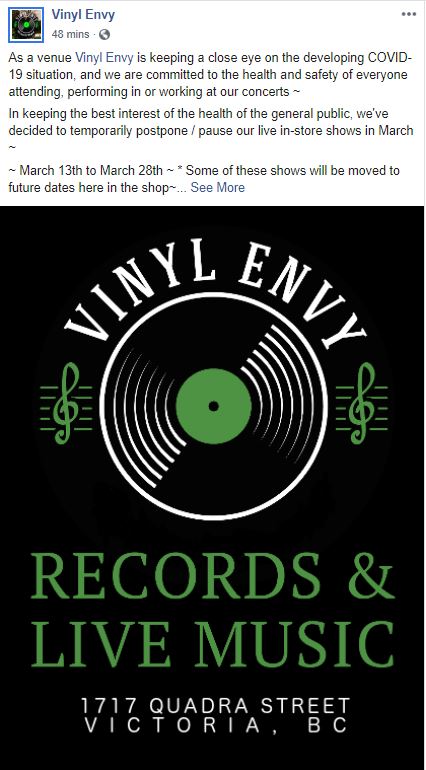 Beach Fire Entertainment has announced that Matthew Good’s two shows at Distrikt originally scheduled for April 8 and 9 have been postponed. Matthew Good posted a statement saying the whole tour is postponed. The tour is being rescheduled for later this year. Purchased tickets will be honoured on the new dates. Refunds are also available at point of purchase. Sebastian Bach has postponed his entire tour including his March 30 date at Distrikt. March 26th’s K+LAB show at Distrikt is cancelled. 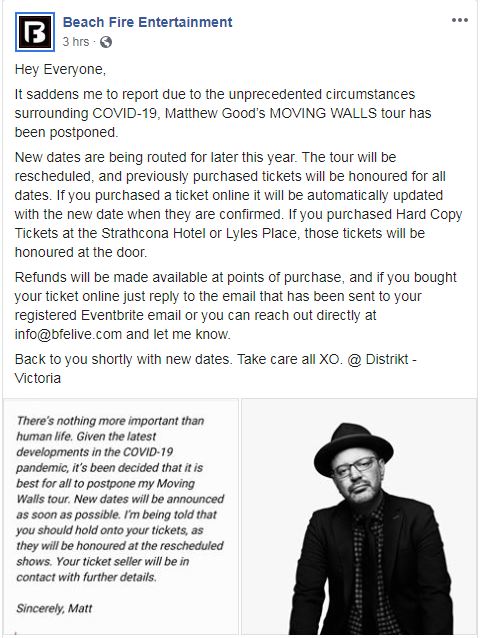 Distrikt issued a statement saying they have installed new hand sanitizer stations and are taking extra cleaning measures. The entire Strathcona Hotel complex has reduced their capacities to 50 people after Monday’s BC health announcement banning gatherings of more than 50 people. 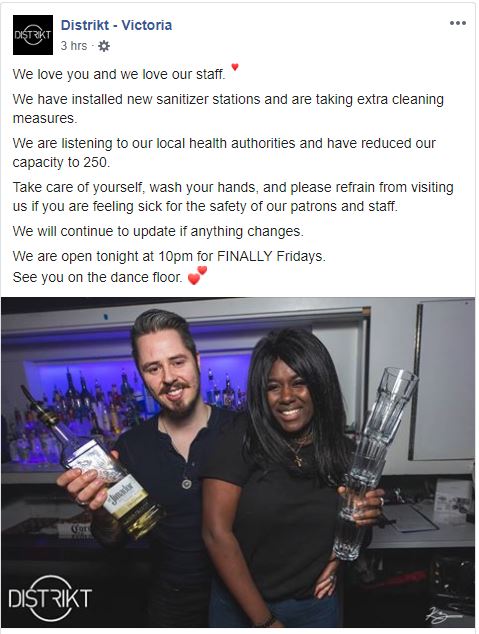 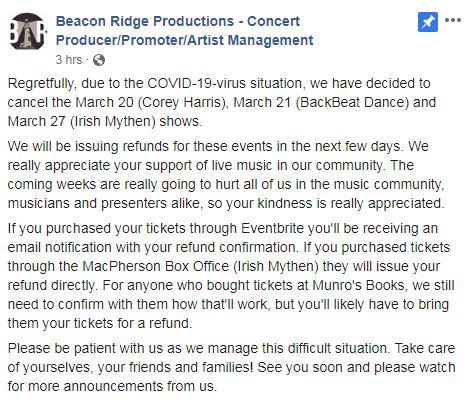 Upstairs Cabaret will be following the guidelines laid out by the health authority. The venue was open Thursday evening for their full moon blacklight party. Friday afternoong, ownership of Upstairs, Darcy’s Pub Downtown and Westshore and The Duke Saloon issued a statement saying they are taking extra measures to sanitize the venus, music volumes will be kept lower than usual to make it easier to maintain social distance recommendations and they will be keeping capacity lower than usual to allow for ample personal space. 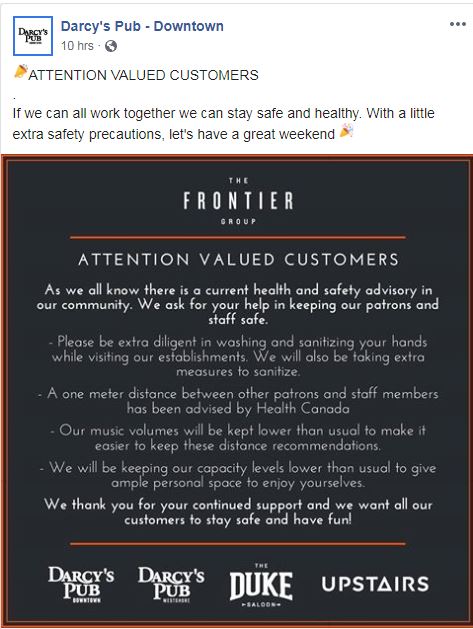 In an email statement, Hermann's Jazz Club says is taking extra precautions with cleaning and service and say that if a show is cancelled, it will be removed from the venue’s website calendar. If the listing is there, the show will go on. A number of shows scheduled for the rest of March have been cancelled. 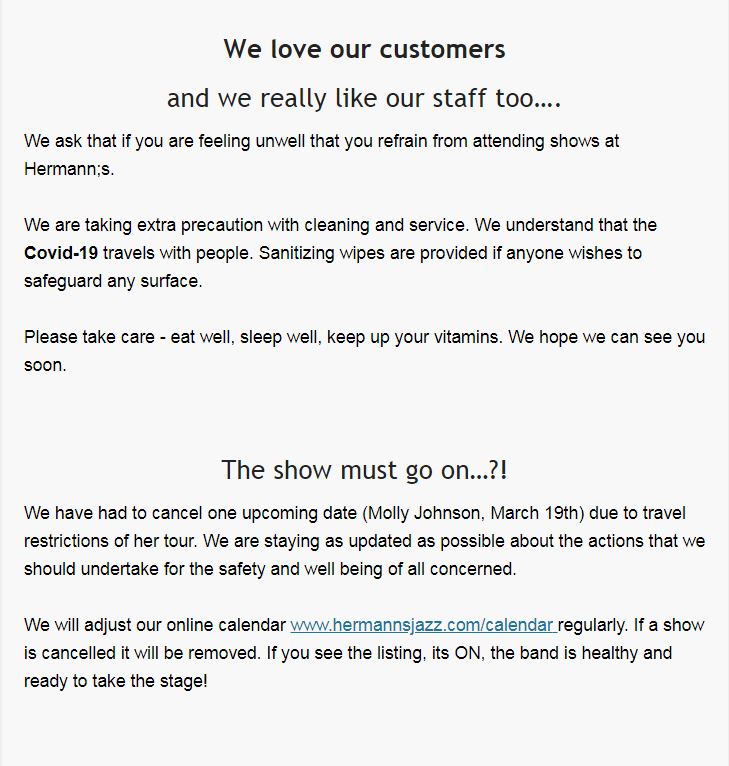 Canoe Brewpub are pausing their live music program as a preventative measure in response to the COVID-19 situation. They will also be capping their capacity to below the 250 person limit.

The Victoria BC Ska and Reggae Society issued a statement Saturday morning. In it, the say that April 3rd’s Belvedere show at Lucky Bar and May 30th’s The Creepshow concert at Victoria Event Centre will go ahead as both are at venues with capacities under 250. As for the status of this year’s Victoria Ska & Reggae Fest happening at the end of June/early July, the society is keeping a positive outlook that the festival will go ahead as planned. International artists are ready and willing to play if borders are open and if governments allow the festival to proceed.

Live Nation is pausing all concert tours through March and will re-evaluate the situation at the beginning of April. Only two shows are scheduled in Victoria in March. Friday afternoon, Live Nation and grandson announced that grandson’s sold out show at Capital Ballroom is postponed. There has not been an official announcement regarding the Fred Penner show at the McPherson Playhouse yet, but based on the temporary closure of the McPherson, the show is likely postponed or cancelled. 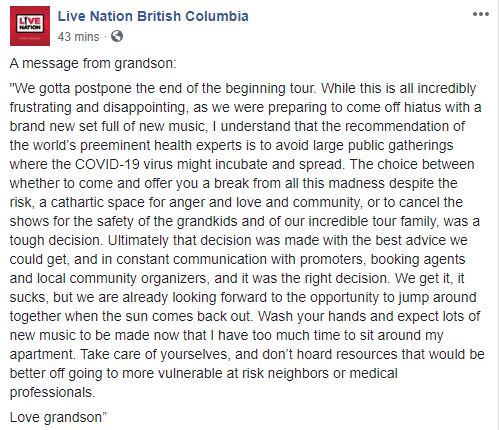 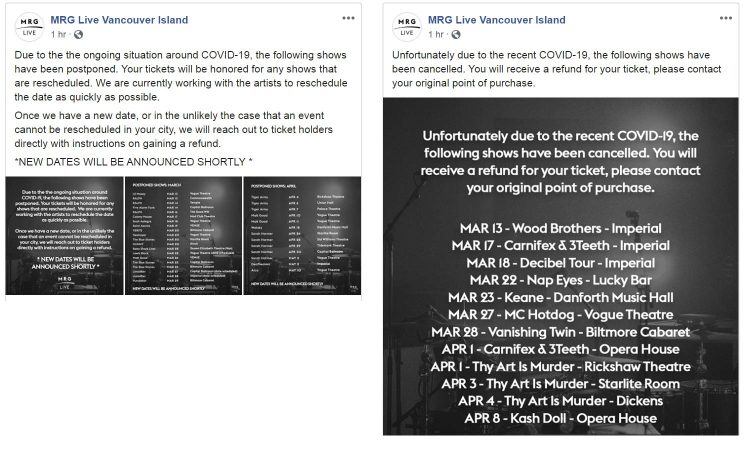 VILA Presents announced Monday March 16 that they have postponed all of their events until at least May 1. 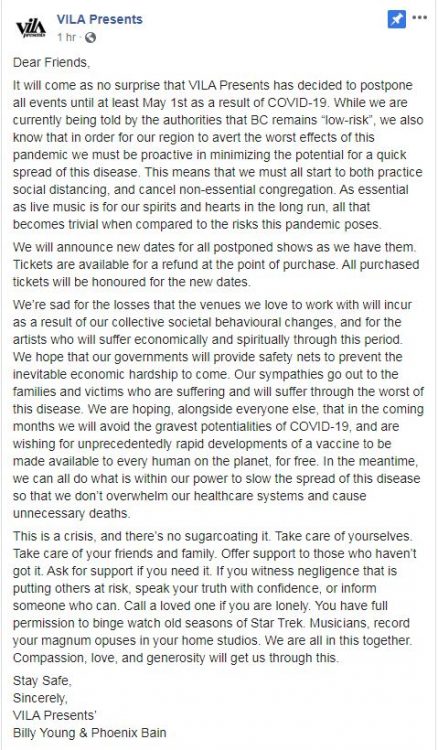 Mary Winspear Centre has announced that they will be cancelling all gatherings larger than 250 people while the social gathering band is in place. They request patience from ticket holders as they effort to get in contact with more information. March 13’s Simon and Garfunkel tribute, March 14’s The Fab Fourever show, Tiller’s Folly March 15 and The Arrogant Worms March 16 are all cancelled. 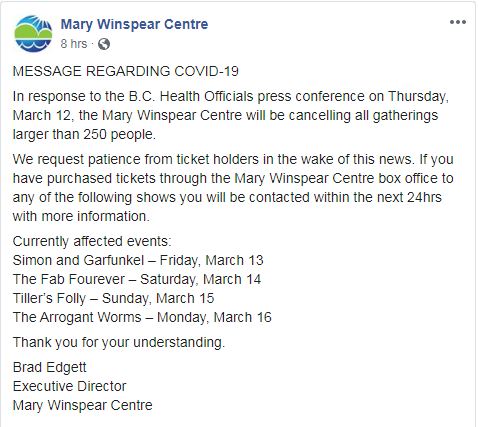 Following the announcement that social gatherings of 50 or more people are now banned on March 16, Lucky Bar announced that they will be closed until further notice. 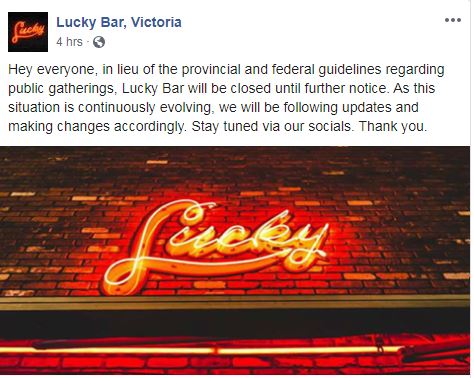 Logan's Pub looks to be continuing business as normal as their Facebook pages have promoted upcoming shows. Both venues capacities are below the 250 threshold. Logan’s Pub issued a statement Friday afternoon saying they are doing extra cleaning to protect staff and patrons and are watching developments closely as their shows will still go ahead.

Save-On-Foods Memorial Centre has issued a statement saying that the health and safety of their guests and staff priority. While no concerts have officially been postponed, they encourage ticket holders to keep their tickets until further information becomes available. 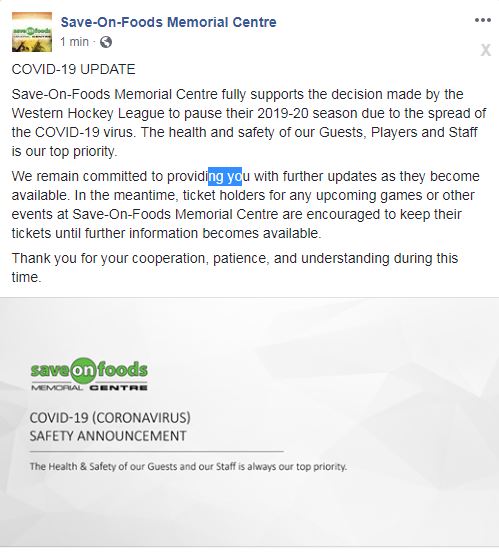 Bard & Banker Pub and Irish Times will follow health officials guidelines and wile be restricting capacity to under 50 people. They have also removed tables to allow for more social distancing. Both of their St. Patrick’s Day events have been cancelled.

Blueprint Victoria has issued a statement laying out the steps they are taking moving forward. Those steps include limiting capacity to under 250 people and increased frequencey of disinfecting surfaces. 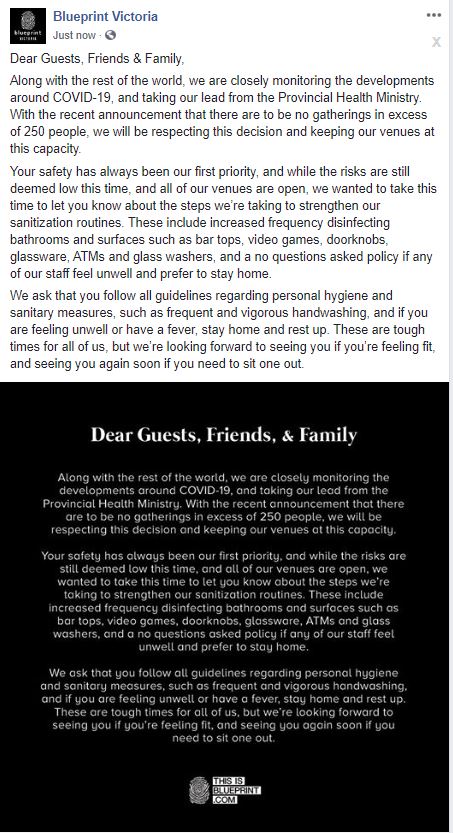 Victoria Event Centre issued a statement saying that their capacity is within the 250 person threshold and that they will increase the frequency of cleaning, offer paid sick leave to employees and encourage employees to work from home when possible. 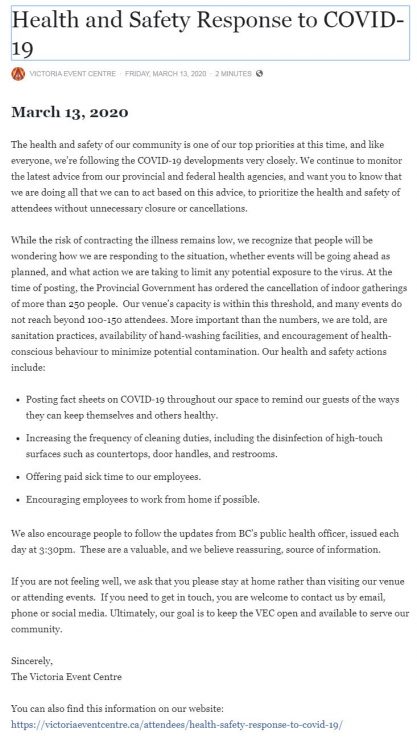 Music BC’s panel discussion and lunch ‘How to be an Export Expert‘ and Victoria Event Centre slated for March 21 has been postponed.

The Mint has announced that they are postponing some of their regular events as well as their live music and DJs until further notice. They will remain open with a 45 person capacity. 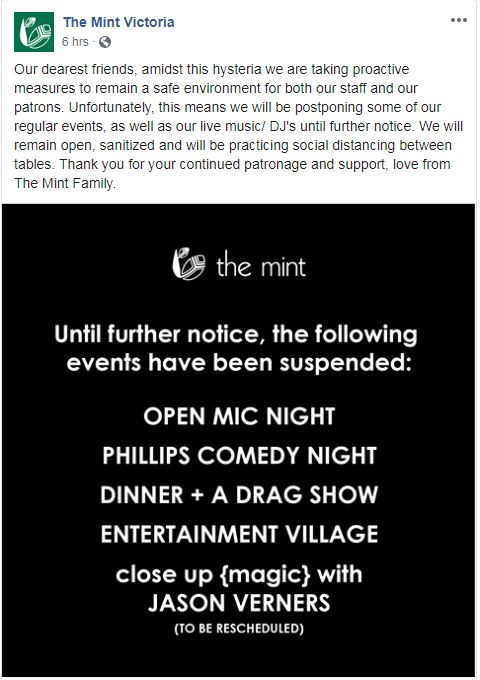