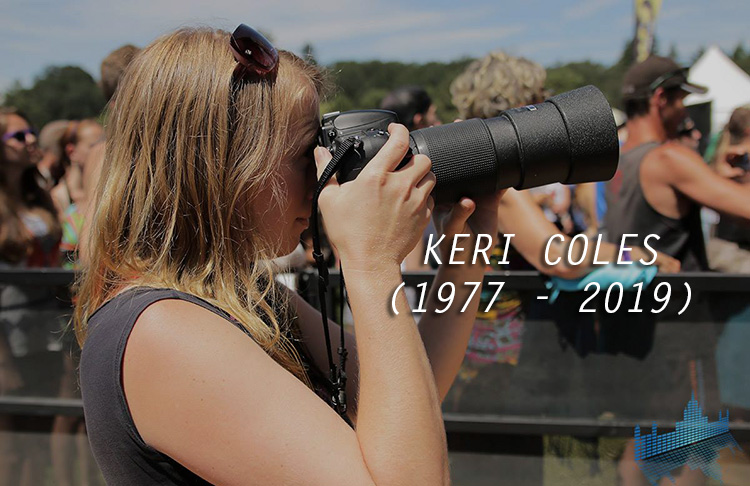 Victoria concert photographer Keri Coles has died after battling an incurable form of non-smoker’s lung cancer. She was 42.

Keri was a professional photographer and an award winning journalist. She was most known in the music scene leading the volunteer photo teams for local music festivals like Rifflandia and Rock The Shores.

At Rock The Shores 2013, Keri’s daughter Ella was brought on stage during City and Colour’s headlining set.

Keri went back to school in 2015 and completed her BA in Professional Communication at Royal Roads University in 2017. She also spent six weeks on a Greenpeace ship working as a photographer and also covered the UN Climate Conference in Paris.

In August 2017 Keri travelled 250km by bike from Vancouver to Seattle as part of the 2017 Ride to Conquer Cancer.

After graduating Royal Roads, Keri took a job with Black Press for Oak Bay News in October 2017. One year later she would take a regional breaking news position at Victoria News. Her work for Black Press earned her the award for ‘New Journalist of The Year’ at the BC and Yukon Community Newspaper Awards.

In the spring of 2019 Coles was accepted into a journalism masters program in Europe. Keri and her family planned to live in Aarhus, Denmark for a year and another year in Amsterdam.

At the beginning of June Keri announced “a major plot twist” on Facebook that she was diagnosed with advanced metastatic non-small cell lung cancer. At the time, she was told that the average life expectancy was six months without treatment and 1.5 years with treatment.

Shortly after, friends launched a GoFundMe campaign to support Keri and her family which as of this article’s publishing has raised more than $28,000.

Keri is survived by her husband Gene Coles and 11-year-old daughter Ella and is also survived by her parents Griff and Pat Tripp, brother Shawn Tripp (Nicole and sons Graden and Nolen) and grandmother Florence Keeler.

A celebration of Keri’s life will be held Sunday November 24, 2019 at the Quarter Deck of Grant Hall at Royal Roads University from 2 to 4:30pm. 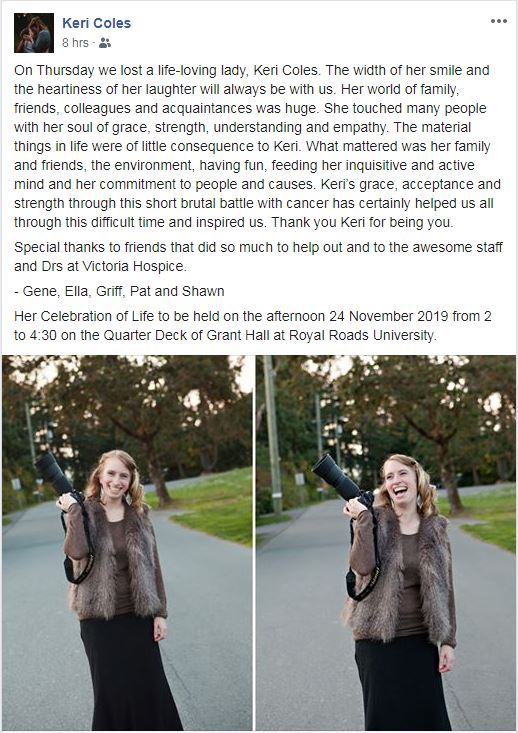