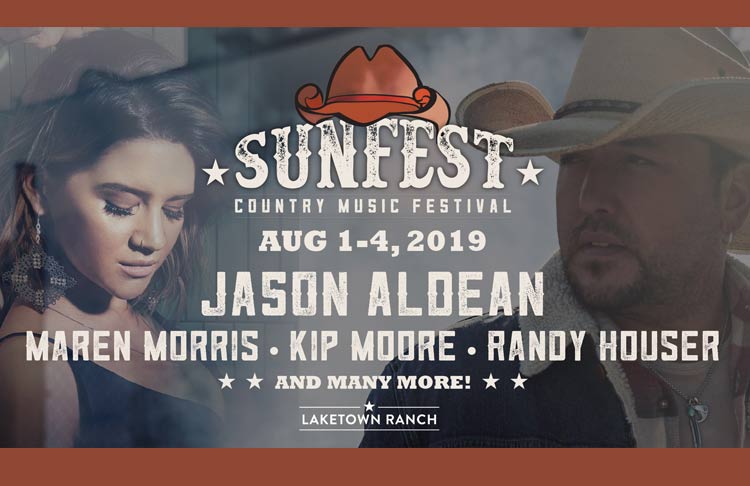 Sunfest 2019 is upon us. Lake Cowichan’s annual country music festival is entering its 18th year and will be the 4th edition at Laketown Ranch. This year’s festival features American country superstars with a up and coming Canadian talent including multiple artists from Vancouver Island.

One noticeable change this year is that there is one less stage. The Flats Stage, which used to be at the top of the hill in the main venue is now the stage that was called the “Saloon Stage” in previous years. The festival map now shows the upper hill being the location of a marketplace and a zipline.

The top headliner this year announced during Sunfest 2018 is country superstar Jason Aldean. With multiple number one hits and albums, it’s pretty much guaranteed fans will be singing along to just about every song on his set.

Saturday’s headliner Maren Morris is likely one of the festival’s biggest coups. Her current world tour is sold out, her single ‘Girl‘ is currently number one on country radio and her sophomore album of the same name debuted at number one on Billboard’s Top Country Albums chart in March. All of this happening after Sunfest announced her as a headliner last November. Morris also brings some crossover appeal after being the featured vocalist in ZEDD’s 2018 top 40 hit ‘The Middle‘.

Other notable Canadian artists with Vancouver Island roots include Victoria’s April Reign and The County Line, Bryce Allan from Sooke, Stetson Road from Gabriola Island and Lauren Spencer-Smith from Port Alberni. Veteran Sunfest goers may remember Spencer-Smith performing a song with Keith Urban when she was 11 years old at Sunfest 2015.
Below is some live footage of the Island artists to preview.