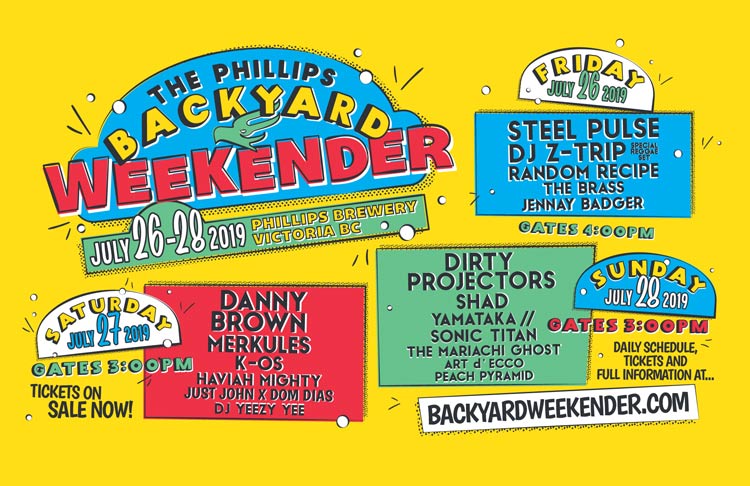 The 2019 edition of The Phillips Backyard Weekender is just days away and we’re here to provide a preview of the artists performing. The festival will only have one stage this year as the former site of the second stage on Discovery Street is full of brewery equipment. That also means there is less local acts on the bill to showcase. So instead of focusing on just the local acts, we’re giving you this preview of everyone at the festival.

Friday July 26
Warming up the early Friday attendees will be Victoria DJ Jennay Badger. She most recently performed at Laketown Shakedown in Lake Cowichan and posted her full set for streaming.

Victoria’s The Brass are second up on Friday and are “not your grandpa’s british brass band.” They’re a non-auditioned community brass and woodwwind ensemble that perform arrangement of songs by famous musicians from David Bowie to LCD Soundsystem to Jay-Z and whatever else they feel like. The Brass last performed at the Phillips Backyard Weekender in 2017.

Random Recipe are a Montreal music group performing a mix of hip hop pop and indie rock. This will be the first time Random Recipe have performed in Victoria. Show them a warm Victoria welcome.

DJ Z-Trip is no stranger to Victoria having performed in the city numerous time over the last decade. This time around, Z-Trip will be performing a special reggae set. It’s only fitting considering who he’ll be on stage before.

Headlining Friday are Steel Pulse, a roots reggae band from Birmingham, England. The band was originally formed in 1975 and was the first non-Jamaican reggae group to win a Grammy for Best Reggae Album in 1985.

Saturday July 27
Starting off Saturday’s music is Victoria DJ Yeezy Yee. If you’ve been to clubs around the city over the years, chances are you’ve seen her DJ at some point.

Toronto rapper Just John and producer Dom Dias perform what they once described as punk-infused hip hop, but they don’t want to be defined by a singular sound. Last year, they toured with alt-rock artist Grandson.

Haviah Mighty is a rapper from Toronto. She released her latest album ’13th Floor’ in May and was the winner fo the 2018/2019 Allan Slaight JUNO Master Class. She most recently performed on Vancouver Island as one third of all-female hip-hop group The Sorority at Laketown Shakedown.

With hits like ‘Crabbuckit’, ‘Man I Use to Be’, and ‘Sunday Morning’ K-OS was a force in Canadian hip-hop in the mid 2000s. This will be the first time in about six years K-OS has performed in Victoria.

Merkules is a 2-time Western Canadian Music Award nominated rapper from Surrey. Earlier this month he announced he had signed with BMG and RBC Records

Headlining Saturday is Detroit rapper Danny Brown. He infamously was not able to perform at Rifflandia in 2013 because he wasn’t able to get across the border. He would make up for it by performing the festival one year later. his new album produced by Q-Tip is due out sometime this year.

Sunday July 28
Opening up the final day of the festival will be Victoria’s Peach Pyramid. They’re a dream pop band lead by Jen Severtson. Peach Pyramid released their debut album in 2017 and are signed to Kathryn Calder’s Oscar St. Records. Peach Pyramid has been one of our favourite bands to cover in the local music scene the last couple years. Don’t miss their short set.

Art d’Ecco is a glam-rock artist currently from somewhere in the Gulf Islands. He intentionally keeps his exact location vague, though he originally grew up in Victoria. Wearing his signature wig and white makeup, his stage show is a sight to see. His set at Rifflandia 2018 at Rubber Boot Club was packed house.

The Mariachi Ghost are a rock band from Winnipeg that have a heavy traditional Mexican music influence. Their stage show includes traditional style dance and day of the dead makeup.

Yamantaka // Sonic Titan is an experimental music and performance art collective based in Toronto, but formed in Montreal. Their sound incorporates Asian C-pop and J-pop, progressive rock, heavy metal and industrial music.

Shad is an JUNO award winning alternative hip-hop artist from London, Ontario. He’s the former host of Q on CBC and is the host of Canadian music documentary series Hip-Hop Evolution. He last performed in Victoria this past February at Capital Ballroom and was a headliner for the Tall Tree Music Festival in 2016.

Headlining Sunday are Brooklyn indie rock band Dirty Projectors. Dirty Projectors have released eight albums since 2002 and have had a number of lineup changes. The band has recently been on tour co-headlining with Deerhunter