Home News Features Feature: From Posting Video of Beardyman at Rifflandia to Driving Him to... 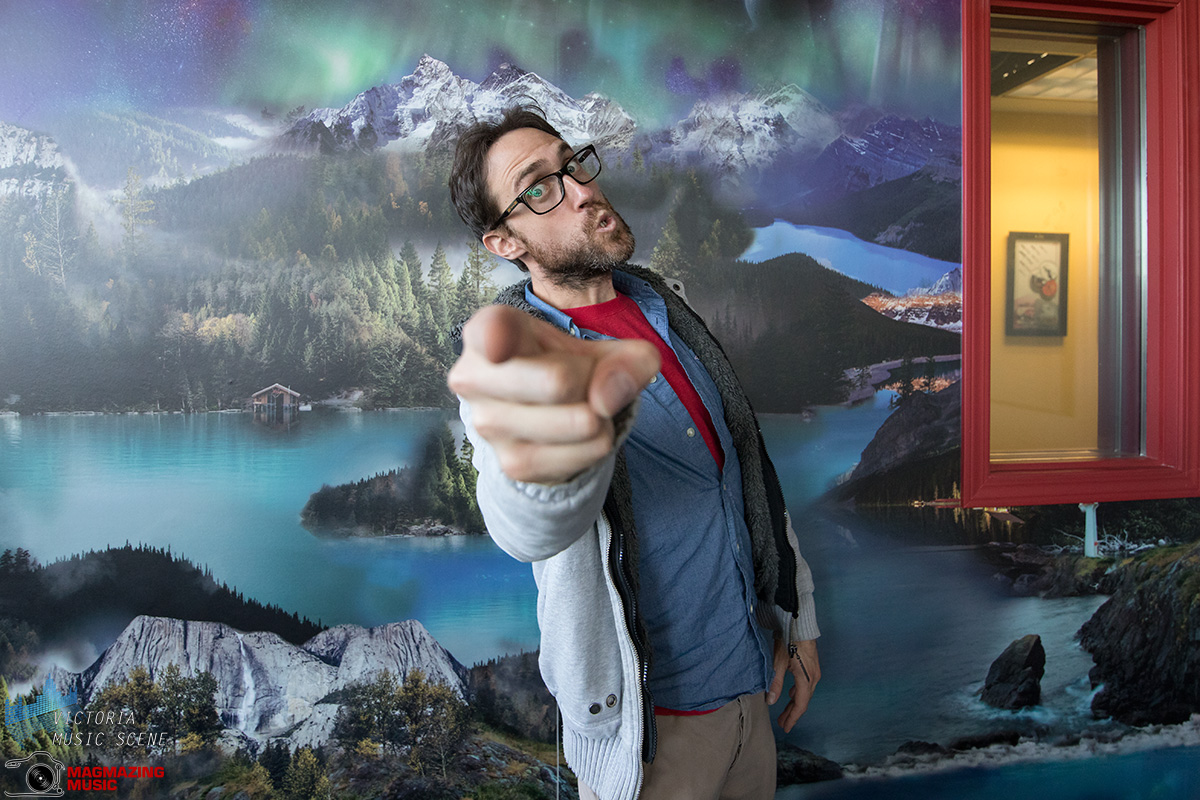 (For those who just want to watch The Zone’s interview, the videos are the bottom of this post)

This is a story of how we ended Rifflandia weekend covering Beardyman at the RiffTop tent Sunday evening and ended up meeting the man, getting a closeup look at how he makes his music, and driving him to Quadra Village’s Caffe Fantastico Monday afternoon after a series of morning tweets.

Beardyman is a British vocalist and comedian known for his beatboxing and use of live looping. His vocal skills have captivated festival audiences all over the world. Having seen him in action at Coachella, his set at Rifflandia was high on the must see list. During his set we captured a cover of The Smashing Pumpkins’ ‘Zero’ and uploaded it to YouTube Sunday night.

Here’s where a rapid chain of events took place.

Just before 7am the video was posted to my personal Facebook account. Thinking nothing much would come of it I went back to bed. By 11:15am The [email protected]‘s Jon Williams found it and shared the video on the radio station’s social media including Twitter. Less than ten minutes later, Beardyman retweeted the post and asked if there was more footage which instigated a back and forth Twitter conversation between Beardyman and Williams that resulted in an accepted request for an interview/live stripped down performance 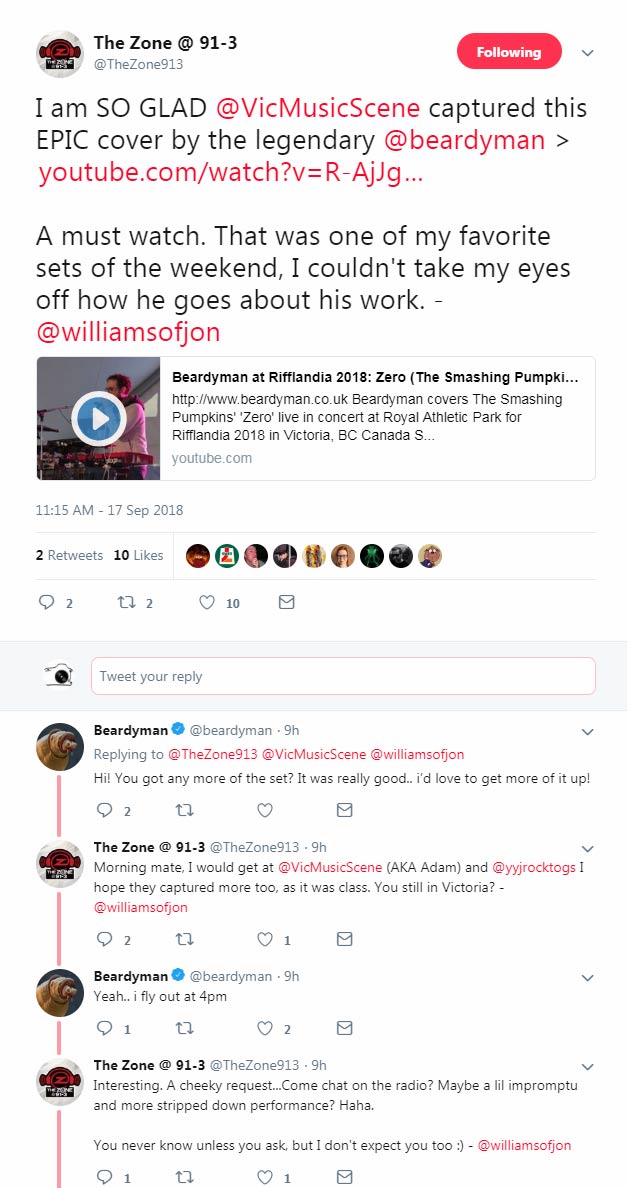 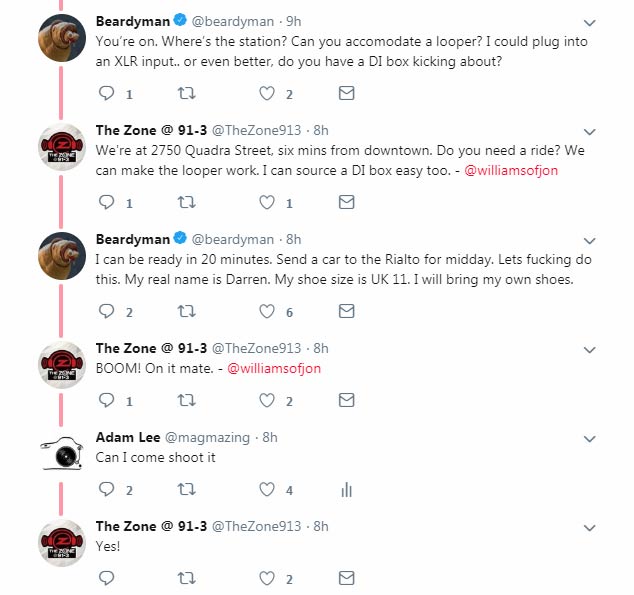 I jumped into the conversation and asked if I could attend and shoot shoot the radio interview and the answer was “yes!” At that point I was still in pajamas recovering from 4 long days of Rifflandia fun. Quickly threw on some clothes, packed the camera bag and ran out the door. By noon everyone was in The Zone’s control room getting ready for the live interview.

The interview and performance was live for 25 minutes over two segments. (see the full videos of both segments at the bottom of this post)

Off the air, Beardyman mentioned that performing in Victoria made him want to learn more about the city. Following the interview, we did a very brief photoshoot inside the studio. 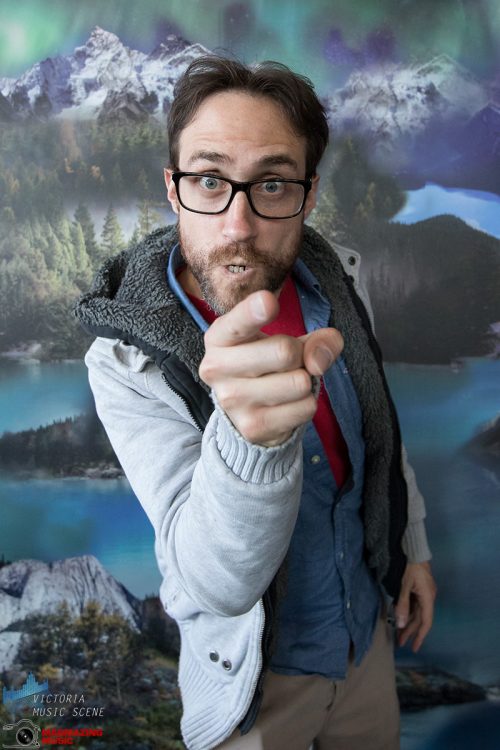 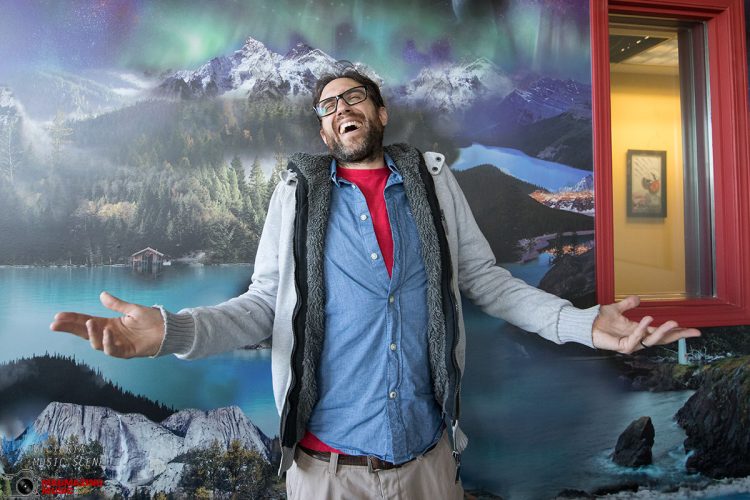 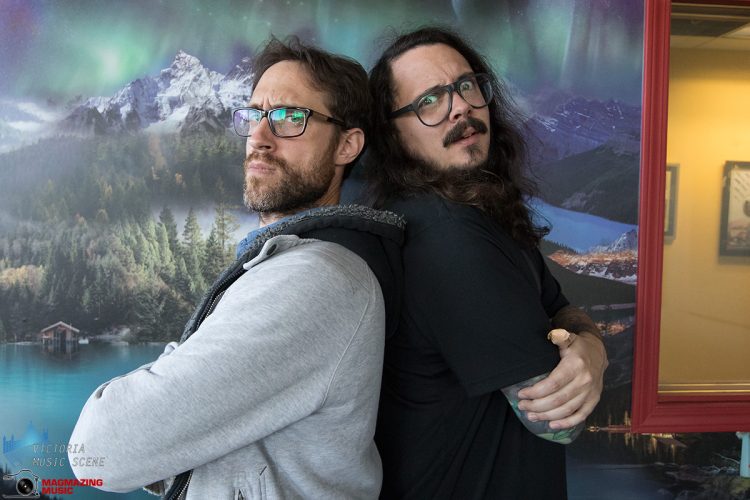 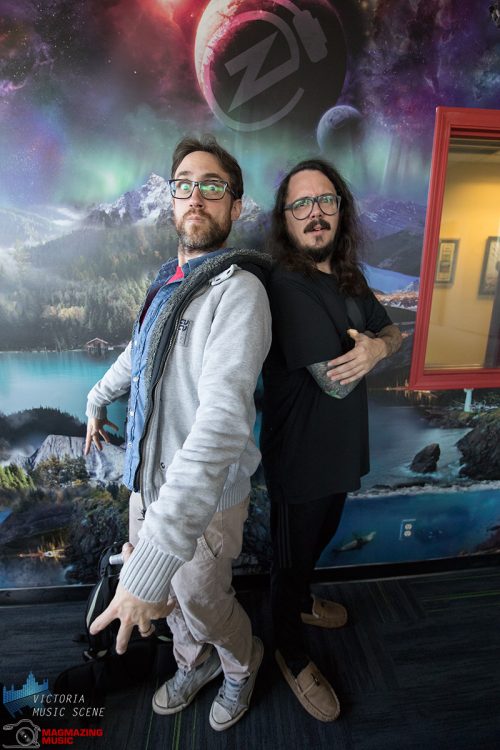 It was only 1:30pm by then and Beardyman’s flight home to London wasn’t until 7pm so he asked if there was a coffee shop nearby to kill time at. This is where I ended up driving Beardyman a few blocks down the street and dropped him off at Caffe Fantastico. Beardman (aka. Darren) was a super nice guy and we hope he comes back to Victoria soon. Jon Williams ended up driving him to the airport.

It was a bit surreal how quickly everything transpired. The power of social media. It isn’t just bots, trolls, and memes. Sometimes amazing opportunities happen. Who knew a Rifflandia moment would come after the festival was over?