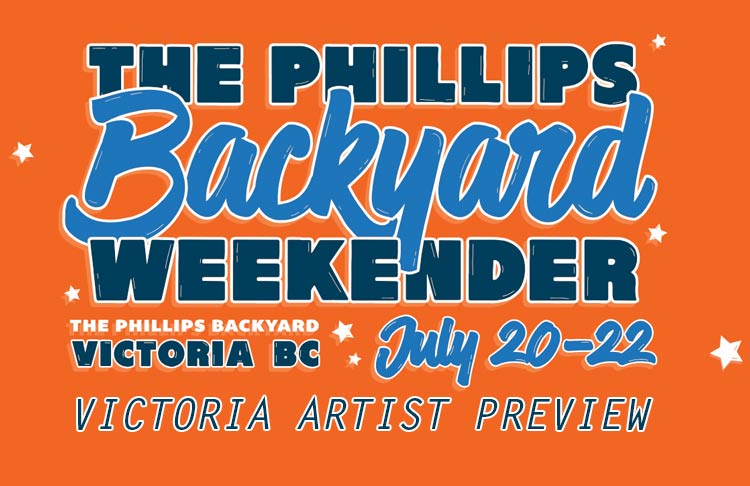 The 2018 Phillips Backyard Weekender is just days away with headliners The Revolution, Reggie Watts and Keys N Krates taking the main stage on the back lot of Phillip Brewery. There will also be some awesome local Victoria artists performing on both the main stage and the Picnic-er stage. Here is your Phillips Backyard Weekender 2018 Victoria Artist Preview.

Friday July 20:
4:15pm – Grossbuster
https://www.facebook.com/GrossbusterMusic
Grossbuster is DJ/Producer Nate Cunnings. If you’ve been to Smith’s Pub on a Monday night, you’ve heard his mix of Bass/Electronic/Reggae/Rap & Juke. Grossbuster has previously performed at Rifflandia in 2016.

5:30pm – Grapefruit is Impossible
https://www.facebook.com/grapefruitisimpossible
Grapefruit is Impossible is a Victoria hip hop group. They describe their sound as “fun, unconventional music inspired by hip hop, jazz, funk with a citrus twist.” Rather than being backed by a DJ, they’re a full band that also includes a couple members of The New Souls.

8:20pm – Dia Nos
http://www.dia-nos.com
Dia Nos are a Victoria hip hop duo Eric Norberg (Dia) and Marco Bermudez (Nostic). You might recognize Nostic from Victoria hip hop/soul band, The Leg-Up Program. With Dia behind the turntables and Nostic rapping and beatboxing, their music mixes in Latin, World, hip-hop, R and B, Tribal and more.

3:30pm – Dylan Stone Band
http://www.dylanstone.ca
The Dylan Stone Band are a Alt-Country/Rock band from Victoria. Stone is a singer and songwriter and also is a key member of The Unfaithful Servants and The Band tribute group The Great Divide.

4:45pm – Diamond Cafe
https://www.facebook.com/DiamondCafeMusic
Diamond Cafe is Victoria’s Tristan Thompson’s ( Not the NBA player 😉 ) R&B/Funk/Pop solo project. If you’ve been hunting for Victoria’s version of Prince, Diamond Cafe comes pretty darn close. Everyone I know who didn’t know of him before were blown away when they heard him sing.

Sunday July 22:
2pm – Miami Nights 1984
https://www.facebook.com/miaminights1984
Miami Nights 1984 is Victoria’s Michael Glover. If you want to dance like it’s the 1980s, this is your set. His entire set will be 1980s inspired electronic synth music.

3pm – LIINKS
http://www.weareliinks.com
LIINKS are Victoria’s Georgia Murray and DJ DWhiz. The pair are Phillips Backyard Weekender vets having performed in 2016 at both the festival and the official after party. With the released of their first single ‘The Break’ a few years ago, LIINKS were named a Bell Media Future Star of The Month. In the last few months LIINKS have released two singles ‘500 Roses’ and ‘Ceiling Fan’.

4:45pm – Tan and Hide
https://www.facebook.com/tanandhide
Tan and Hide are a Blues/Americana rock band from Victoria. They most recently performed at Laketown Rock in Lake Cowichan in June. Tan and Hide “will take you to a dusty place out west with there music and will have you tapping your toes and out of your seat in no time.”
4