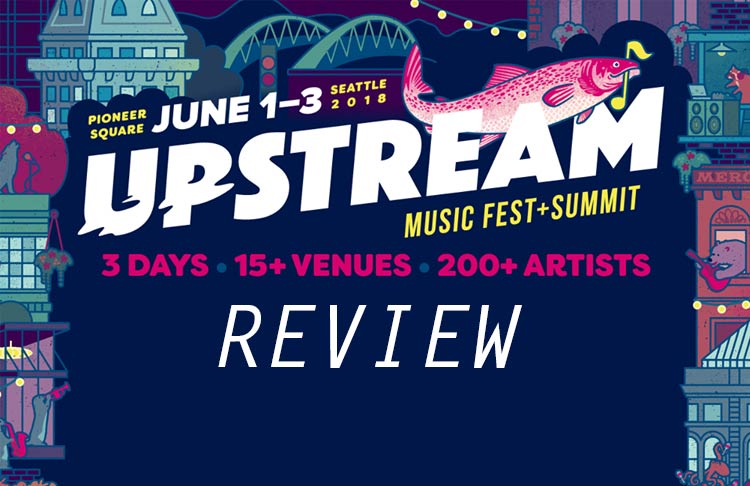 Last month I had the opportunity to experience Seattle’s Upstream Music Fest + Summit. It was the second edition of the festival created by Microsoft co-founder Paul Allen. The festival features a collection of up-and-coming artists across almost all genres. Most artists are based in Washington State, but there were a number from Oregon, California and decent Canadian contingent.

Victoria concert-goers who have gone to Rifflandia would find the vibe at Upstream somewhat familiar. Shows are spread out at multiple venues all within a few blocks in Seattle’s Pioneer Square area of the city with two major stages in a parking lot behind Century Link Field, the home stadium for the Seattle Seahawks NFL team and Seattle Sounders MLS team.

The lineup for each stage was curated by guest curators ranging from publications like Consequence of Sound, record companies like Sub Pop Records and Barsuk Records and even Victoria’s Do250 who curated a ‘Canada House’ stage with Vancouver’s Do604.

Upstream isn’t just a music festival. It also has a summit portion providing a number of workshops and guest speakers for aspiring musicians to learn from experts working in the industry. Some sessions we attended included one where Seattle DJ/Producers ODESZA spoke about life on tour, a session with band managers speaking about their roles, and a “fireside” chat with Krist Novoselic where he spoke about his life with Nirvana and what he has done after the grunge years.

Local radio station KEXP recorded performance sessions with select bands in the festival lineup for broadcast and on YouTube. I had the opportunity to take some photos during Little Dragon’s session the first day of the festival before their main set.

The first Seattle artist I checked out was Judd Wasserman who performed in Occidental Park in the heart of Pioneer Square. A small tented stage was set up in the plaza that had tables, chairs and even ping pong tables.

Music kicked off at The Sound Lot at 5pm with Toronto’s Charlotte Day Wilson followed by Superduperkyle and Little Dragon. With festival wristbands having full in-and-out privileges I left part way through Little Dragon to check out some of the other venues. To get in an out of venues, security had to scan the RFID wristbands with what must have been an app on cell phones using Bluetooth. Unfortunately there were a number of occasions where wristbands just wouldn’t scan properly causing some delays at entrances.

The first smaller venues I frequented all weekend was Victoria’s Do250/Vancouver’s Do604’s ‘Canada House’ at Quality Athletics. Quality Athletics is a sports bar/restaurant that is one block away from Century Link Field. The stage was set up directly in front of the kitchen. The music lineup included artists from Vancouver, Vernon, Edmonton, Winnipeg and Regina/Saskatoon. The first night included performances by Nuela Charles, Schwey and Dear Rouge. Saturday had Samurai Champs, Little Destroyer and Five Alarm Funk, and Sunday had sets by Snotty Nose Rez Kids, Living Hour, daysormay, and Yukon Blonde. Toronto female rap group The Sorority and Vancouver hip-hop duo So Loki were originally in the lineup, but unfortunately were forced to cancel their appearances. Attendance ranged from medium-sized crowds to jam packed with a line outside for Five Alarm Funk. Sunday’s attendance numbers were lower due to the first couple bands bands having to perform opposite headliner The Flaming Lips.

Soul singer Grace Love performed at The Lower Quarters at 13 Coins which is an underground bar space under 13 Coins restaurant. Love began her set singing acapella before bringing up a band to back her up.

After a few songs I walked back to The Sound Lot for the evening’s headliner Miguel.

The Helio Sequence performed in a ballroom at the Embassy Suites Hotel. It felt a little strange taking hotel elevator and entering a carpeted room to see a concert, but a venue’s a venue.

My Friday was capped off with The Seshen performing at Central Saloon, a long narrow bar with a stage at the back.

My Saturday kicked off observing a KEXP session featuring Hot Snakes. Photographers were not allowed in this time around so all I could do is listen from outside.

Music at The Sound Lot kicked off with Seattle’s Tacocat on the main stage. Having seen them at Coachella and Rifflandia, they’re a fun indie punk band to watch and take photos of with their colourful hair and attire.

From there I left The Sound Lot to take in Kristen Marlo and Heather Thomas who were busking in Pioneer Square.

Willie Nelson’s son Lukas Nelson & The Promise of The Real were up next on the main stage performing a high energy set and Lukas sounding quite a bit like his dad.

Punk rockers Hot Snakes performed on the KEXP stage. Guitarist John Reis had three bottles of Corona set up near his mic stand and moments before their set began Reis took two of the bottles walked on to the sub in front of the stage and proceeded to shake them and spray beer on the photographers that had assembled in the middle of the stage. Thankfully I was off to the side. While you can argue “that’s rock and roll”, it’s also not fun having to clean beer off thousands of dollars worth of camera equipment.

After taking photos of Hot Snakes I ran over to the two AXIS venues to see two very different artists. From folk artist Maiah Wynne & Her Sleepless Knights from Portland to grunge pop band Great Grandpa. As someone attending the festival for the first time and first time experiencing Seattle’s music scene, it was fun sampling so many artists I’d probably would never have known about otherwise.

After venturing to Occidental Park for some of Whitey Lyman‘s set and the first group to perform Canada House it was time for one of my favourite new discoveries. Before the festival, I YouTubed a lot of artists to figure out who to cover and came across Elise Trouw‘s live mashup video of Foo Fighter’s ‘Everlong’ and Billy Caldwell’s ‘What You Won’t Do for Love’. The video shows here singing, playing guitar, bass, keyboard and drums by herself all in one take. On top of that, she’s just 19 years old. I was very interested in how her live looping would translate live and in person and was thoroughly impressed.

Saturday’s headliner was recently reunited punk band Jawbreaker. Because I didn’t want to miss Elise Trouw and Vancouver’s Little Destroyer, I didn’t catch Jawbreaker until halfway through their set.

Two bands that performed at The Central Saloon Saturday night featured bands with Seattle Grunge era legends. Though you’d be forgiven if you didn’t know they were in the bands that were performing. Seattle’s MKB Ultra features guitarist/producer Jack Endino. Endino produced Soundgarden’s ‘Screaming Life’ and Nirvana’s ‘Bleach’ album. Then there was Giants in The Trees, a band that features Nirvana bassist Krist Novoselic on bass and accordion. At one point I was taking photos of Krist and he noticed was I was doing and stared directly at my lens. Made my night having a founder of a legendary band posing just for me.

Sunday began with rain. Rain in Seattle? That’s unheard of! (*sarcasm). But the rain eventually stopped as the day progressed. Daniel Pak brought some chill reggae vibes that helped people forget about the dampness and the good vibes continued with soul band The True Loves.

After taking some photos of Memphis Tennessee’s Valarie June, I ran over to the Starbucks stage to catch some of The Brodcast‘s set and to the Central Saloon for Red Ribbon.

Across the street from The Sound Lot Ramonda Hammer performed at Elysian Fields. Ramonda Hammer was one of my favourite new discoveries of the weekend and I wish I could have stayed for their full set, but I had to run to catch the tail end of Snotty Nose Rez Kids and one song of dreamcatchr then get in photographer line for The Flaming Lips.

The Flaming Lips are always an experience to behold. Wayne Coyne was in a pirate outfit with an eye patch. There was confetti, giant balloons, a large inflatable robot, Coyne rode a unicorn in the crowd and also rolled on the crowd in the Flaming Lips signature hamster bubble. You don’t have to know The Flaming Lips’ music to enjoy the spectacle that is one of their shows. Coyne even held up giant balloon letters that said “F**K YEAH SEATTLE”.

As much as would have liked to stay for all of the set, I wanted to cover as many bands as I could, so I left early to try to see The Living Hour at the Canada House stage, but arrived just as the last song was ending. I could’ve ran back to catch more of The Flaming Lips but I stayed put to make sure I wouldn’t miss Vernon’s daysormay. From there it was off to see Murder City Devils at the AXIS 1 stage.

Another new discovery I was impressed with was Los Angeles’ Lo Moon. Looking into them further after the festival I discovered their debut record was produced by Chris Walla (formerly of Death Cab for Cutie).

Closing out my Upstream experience was Vancouver’s Yukon Blonde.

My final thoughts:
Coming as a person very used to multi-venue festivals like Rifflandia, Upstream was a very familiar experience. You’re probably not going to see mega-headliners anytime soon at the festival and your mainstream concert goer may be turned off by that. But this festival isn’t supposed to be a Coachella or even a Bumbershoot. The main point of Upstream is to showcase mostly up-and-coming artists from around the region. I went knowing very little of the artists and left discovering a few gems I’d love to know more about and see come up to Canada.

The summit portion of the festival is super informative and a great opportunity to network with and learn from experts in the music industry and should not be missed. I wish I could have attended all the sessions on the schedule.

The Sound Lot had a decent layout with two side-by-side stages, but I was surprised there were 15 minutes breaks between sets even though the stages alternated. More people might stay within the main venue if the music on the next stage started right away.

The price for a bottled water at $5 was too much. Converting that $5 to Canadian dollars, it makes that bottle of Dasani water close to $7. I can understand the “festival pricing” markup for a bottle of Coke, but keep water prices lower or have free tap water filling stations on site. Speaking of drinks, I don’t know what Seattle’s liquor bylaws are, but the experience in The Sound Lot would be so much better if it had an open licence. So many festivals now allow you to consume alcohol throughout a venue, having people stuck in a fenced off beverage garden just to drink a beer feels so behind the times. One other thing I found a bit odd on the final day of the festival was that a few of the food vendors at The Sound Lot were strangely absent on Sunday.

With all that said, I thoroughly enjoyed my time exploring the music at Upstream Music Fest + Summit and Seattle’s music scene.

To view our full photo galleries go to our Facebook Page by clicking any of the following: June 1 | June 2 | June 3