Home News Features Feature: A Preview of The Do250 Curated Stage at Seattle’s Upstream Music... 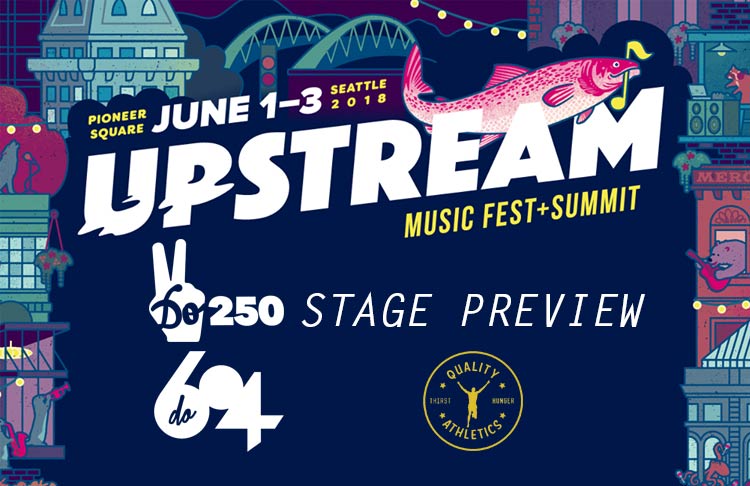 Seattle’s second annual Upstream Music Fest + Summit is coming up next month. The festival features 23 venues and 241 bands and musicians performing within 5 blocks of each other in the Pioneer Square area of Seattle.. Unfortunately, no Victoria based artists are part of the the lineup this year (Astrocolor and Mike Edel performed last year), but Victoria’s Do250 and Vancouver’s Do604 have again partnered to guest curate a stage showcasing Canadian talent. We’re providing a preview of Canadian artists performing at the Do604 & Do250 Canada House stage at Quality Athletics, a local sports bar.

Upstream Music Fest + Summit takes place Friday June 1 to Sunday June 3, 2018 and will be headlined by The Flaming Lips, Jawbreaker, Miguel, Little Dragon, Cut Copy and Hot Snakes. General Admission passes range from $70US for a single day to $175US for the whole weekend

Friday June 1
8:00pm – Nuela Charles
Edmonton’s Nuela Charles kicks off Upstream Fesitval at the Canada House stage. Her sophmore album ‘The Grand Hustle’ was nominated for ‘Adult Contemporary Album of The Year’ at the 2018 Junos. Her music style has been compared to the liks of Amy Winehouse and Adele and has been featured in a number of television programs. Below is a performance at CBC Music’s First Play in 2017.

9:15pm – The Sorority
Four female MCs from Toronto, Haviah Mighty, Keysha Freshh, Lex Leosis and Phoenix Pagliacci came together at a freestyle jam session on International Women’s Day in 2016. The video of that all-female cypher has garnered more than 100,000 views on YouTube and they soon became The Sorority, “a sisterhood of talent destined to empower, entertain and educate.” Below is the performance that brought the women together.

10:30pm – Schwey
Vancouver’s Schwey is a Soul/R&B band that formed in 2013 when founders Isaiah Dobbs and Jacob Schwinghammer were still in high school. Schwey recently opened for Busty and The Bass at Capital Ballroom back on March 5th. We couldn’t find any recent live footage of the band, but below is their recent single ‘The Rhythm’ that they released last December.

11:45pm – Dear Rouge
Vancouver’s Dear Rouge are no strangers to concert goers in Victoria having performed in Victoria multiple times including at Rock The Shores, New Year’s Eve in December 2016 and Rifflandia. The husbland/wife duo of Drew and Danielle McTaggart won the 2012 Peak Performance Project and were the 2016 Breakthrough Group of The Year at the Junos. Dear Rouge most recently opened for Lights on her North American tour and will headline their own tour in the fall. Below is a performance from Rifflandia 2017 of their latest single ‘Boys & Blondes’

Saturday June 2
8:00pm – Samurai Champs
Starting off day 2 of the festival are Regina/Saskatoon hip-hop duo Samurai Champs. Their music blends Jeah’s rap vocals with Merv xx Gotti’s R&B vocals and draws influence from their Southeast Asian Heritage. Jeah is a first generation Cambodian-Canadian. The duo was nominated for Urban Artist of The Year at the 2017 Western Canadian Music Awards. Below is a video of Samurai Champs performing ‘Party’ live.

9:15pm – Little Destroyer
Little Destroyer are a trio from Vancouver that we have had the opportunity to see on three occasions last year. Once opening for Fake Shark at Lucky Bar and twice during the 2017 Phillips Backyard Weekender at both the festival and the afterparty. Each time we were impressed with frontwoman Allie Sheldan’s energy and stage presence. Below is a performance of their latest single ‘Mansions’ performed at Lucky Bar last May. They recently released an official music video for the song.

10:30pm – So Loki
Vancouver rapper Sam Lucia and producer Geoff Millar are So Loki. Their new EP ‘Planet Bando’ is scheduled for released a week before their Upstream performance. Complex magazine named them one of their favourite acts of 2017. We couldn’t find any live footage of So Loki online, so here’s their music video for their recent single, ‘Athletes World’.

11:45pm – Five Alarm Funk
Vancouver’s Five Alarm Funk have thrilled Victoria audiences for years with their wild stage shows and high energy grooves and funk. the eight piece band have released six albums and recently were nominated for Instrumental Album of The Year at the 2018 Junos.

Sunday June 3
8:00pm – Snotty Nose Rez Kids
Snotty Nose Rez Kids are an indigenous hiphop duo from the Haisla Nation near Kitimat, BC. They’re now based out of Vancouver. Their music pays homage to their upbringing on the reservation “while also touching upon larger themes related to Indigenous identity, politics and resistance in ways that engage a diverse audience.” Below is a performance from the Koksilah Music Festival.

9:15pm – Living Hour
Living Hour are a five-person dream-pop band from Winnipeg. They have performed in Victoria twice since 2015. Once at Logan’s Pub in May 2015 and at Vinyl Envy in June of last year. Their music has been described as atmospheric, chill, psych pop and shoegaze music. Below is a recent session they recorded for Audiotree Live

10:30pm – daysormay
daysormay are a 5-piece alternative band from Vernon. Formed in 2010 when the members were in grade 6, daysormay were originally called Armistad. In their Facebook bio, Rod Campbell of Victoria’s Mindil Beach was quoted as saying, “they are rock stars through and through. I’d say it’s only a matter of time before these guys get famous.” Below is a video of daysormay performing a newer song live at the Surrey Tree Lighting Festival last November.

11:45pm – Yukon Blonde
Vancouver’s Yukon Blonde are another familiar band in Victoria with a number of singles on the radio and performances at locak festivals like Rock the Shores and Rifflandia even dating back to 2010 when the band released their debut album. In 2015 their single ‘Saturday Day Night’ reached number 11 on the Canadian rock/alternative charts. Below is live footage of their performance at Rifflandia 2017.