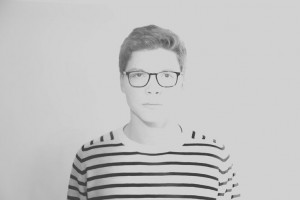 Singer-Songwriter, Kevin Garrett recently ventured to Victoria to support James Vincent McMorrow in his North American tour Friday February 27, 2015. The show was one of four that stretched across Canada, selling out the Alix Goolden on February 27th. Kevin has broken onto the singer-songwriter scene with exposure coming from being selected on Spotify’s ‘New Music Tuesday’ and ‘Viral Top 50’. His vocal abilities seem limitless, while his personality and humbleness shines through and through. We sat down with Kevin to talk about his growth as a musician, touring with James and Settlers of Catan.

KG– Yea, it’s my first time playing (in Canada), however I’ve been to Quebec City for a family vacation when I was a child. When James called me up and told me about the shows in Canada, I was extremely interested in supporting him. I started off with my own show in Winnipeg, it was cold, and a smaller crowd but still very fun. This Victoria show was my 5th show in Canada, my fourth with James- It’s been an amazing experience, one that I’m so greatful for.

CB-How did you and James meet?

KG– We met while I was touring with my band Noble Hunter. I’m from Pittsburgh, and we linked up with this promoter, and we (Noble Hunter) didn’t stink it up too bad. James liked what he heard, he has been very supportive towards us, so when I got the message from James and his people about this opportunity to tour in Canada I jumped right on it.

CB– How do you unwind during touring?

KG– Honestly, the first few days the unwinding was post-show driving. I was in Winnipeg and decided to stay in Brandon, Manitoba, so for that two hour drive to Brandon I was reflecting on how my show went. My unwinding time usually takes place after the show. Everyone has different ways to unwind, I just try and find the time at any point to reflect.

CB– How did you get started in music?

KG– Both my parents played instruments and went onto college to do different things. When I was about five, I started playing violin. I don’t know why I chose the violin, but I played it for almost 20 years. It helped get me into college. I went to NYU and they were very flexible with practicing because I found the longer I played violin the less I kept on practicing. I started writing 10 years ago, I began feeling inspired. I like to think that my real career began in 2009 when I got to New York. That’s when I started playing out in the city, and people were really digging it. I knew that if I was good enough to hold my own out in NY I could keep going. It always helps when you have a guy like James Vincent McMorrow on your side, he has really helped me in growing. He’s such a genuine guy who speaks so highly of me when he’s on the stage.

CB– How do you differentiate yourself as a singer/songwriter?

KG– Everyone is influenced by so many different things, my first band was very folk rock-ish, but I began to be more influenced by soul music so when I started writing this new stuff (Control/Coloring) I kind of just coining this phrase ‘Odd Soul’ around it, it’s a reference to one of my favorite songs by Mutemath. Basically for me it means that its soul music but I’m coming at it at different directions through my many influences. People started running with ‘odd soul’, a couple pressers came in and started calling me ‘Odd Soul’. I think when you really look at singer/songwriters, we’re all very different when you actually break it down and pay close attention to where each performer is coming from. The one thing that I am a huge fan of is comedy. There are a lot of parallels in music and comedy especially from a song writers perspective. My favorite thing to do during sets is to bring the vibe down with songs, then bring them back up with low class humor…only to bring them back down again with my music.

CB– What’s getting a lot of play on your discman?

CB– What’s next for Kevin Garrett?

KG– A March EP is in the works, there will be 3 other tracks (5 song EP), I just put out a nirvana cover in celebration of Kurt Cobain’s birthday but it’s kind of went under the radar. In April I’ll be touring a lot with Canada’s own Hey Rosetta which I’m super stoked about.

In March, James and I are gonna link up and hopefully play settlers of Catan. This is the first time I’ve talked to someone about this in an interview environment. In College I took a game design class as an elective and we had to write a paper about a game of our choice. I wrote it on settlers because I was very hooked on the game….I wrote about 25 page paper on how there is no expertise in the game. So now that James has been talking about Settlers during his set…everyone is coming up to me and asking me questions about it. I’m always reading to throw down here in Canada town.

CB– Where do you see yourself in five years?

KG– I want to still be touring with James Vincent McMorrow. To be honest, I don’t even know what’s happening tomorrow; I’m supposed to be getting on a boat so that’s my goal as of right now. Down the road it would obviously be cool to do a couple headlining gigs, but I definitely want to do more stuff with James over the next few years. Maybe in five years, I’ll have some other records out. Coloring was a two year process and Control I wrote when I was seventeen. I love making music so I’ll continue to write and continue to make as much music as I can. I hope I’m still around in five years. I eat a lot of potato chips, I should probably cut back on my intake. I want to go low carb and stay away from fast food, however I always find myself waiting in McDonalds drive through. Touring is tough, but I’ll work on cutting back my salt intake.