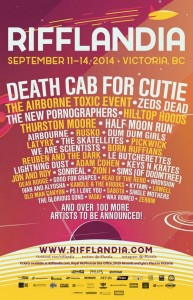 Atomique Productions presents Rifflandia 2014 at Royal Athletic Park and various venues in Victoria Thursday September 11 – Sunday September 14, 2014. The first wave of 40 artists of the lineup was released live on The [email protected] at 4pm June 26, 2014. 100+ more are to be announced.

First Wave of the Rifflandia Lineup: