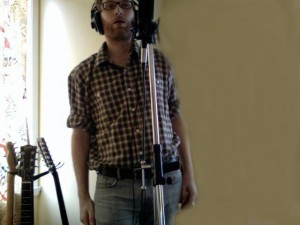 The musician known as Billy Ghost has appeared, seemingly out of nowhere, to present us with the offering of an album simply entitled ‘Billy Ghost’. And, like other ghostly apparitions, it is uncertain whether this emanation will ever return.

“I could develop into something,” explains SG, the man also known as Billy Ghost, “or it could be just a one-off.”

“There has been no test of time for it,” adds DS, life partner to SG.

SG is in fact fairly prolific, and he frequently puts music he has recorded up on Bandcamp. Acknowledging that some people may listen simply because they know who he is, he often makes up band names for the music that he puts out. He admits that this approach may jeopardize his chances of the popularity that comes with name recognition.

“It’s a weird impulse,” he says. “I mean, I do want people to listen, but at the same time I would like to get objective feedback. Let’s face it, your family and friends will always like what you do.”

SG and DS’s journey to their home in Victoria has been a circuitous one. They are originally from Canada’s smallest province, Prince Edward Island. Needless to say, the potential for a musical career was limited.

“There was only one record store in the whole province,” remembers SG.

“No,” pipes in DS, “there was another one over in Summerside.”

The pair formed a band in their home province and even managed to land a record deal. Eventually, their recordings lead them to relocate to Montreal, where they spent a number of years striving to establish themselves as recording artists.

“We put out a couple of 7 inch’s,” says SG. “We also spent time playing with other groups, such as Valley of the Giants. We did record a full album but it wasn’t released by the record label we were with at the time – it only appeared later under a different label.”

Finally, health problems culminated in a move to BC, because SG’s family had some property here where he could live and recuperate. For about 4 or 5 years the duo tried to pick up their musical career by working with other local musicians.

“We worked with several people but it never clicked,” says SG. “You need chemistry. Also, you need to practice. A lot of these musicians have young families and they could never really spend the time. So, about a year ago we just gave up.”

But SG did not give up writing songs. In working on his own, his preference has been to perform music on the computer. However, a computer crash some time ago changed all that.

“The computer just died,” he says. “It wasn’t working for 3 or 4 months. So, the making of the album (‘Billy Ghost’) was all on instruments. I had a piano, but I didn’t know how to play it very well. This was a good way of learning. There is also guitar, which I am much more proficient at. Having no band there were no arrangements per se. It reminded me of being 16 years old, when you first start out writing songs. It’s simple chord progressions.”

The simplicity of the approach to the album may be the key to its success. It is, in short, a lo-fi charmer and a treat for anyone who enjoys an original blend of folk/pop/grunge/psychedelia. Is it too much to ask, then, that we get to see Billy Ghost perform live?

“I would like to play (live) as Billy Ghost,” says SG. “Thing is, we haven’t done any gigs since we moved to Victoria. We wouldn’t want to play unless it sounded good – like with previous bands we’ve played with. And with my own work I haven’t worried about whether the songs are performable. For example, on this album there is a 3-part harmony – it would be pretty hard to find people to do that with. On the other hand, the songs on this album are quite simple, so anyone could play them.”

SG admits to a certain amount of trepidation when it comes to getting up on stage, in fact the prospect terrifies him. For us the listeners, the only thing that should cause us anxiety is the possibility that we may have seen the last of the spectre known as Billy Ghost.
******
Listen to Billy Ghost:
http://billyghost1.bandcamp.com

Read the album review at:
http://www.ridethetempo.com/2014/05/31/album-review-billy-ghost-billy-ghost