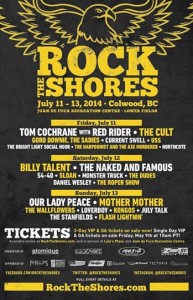 Atomique Productions announced the final lineup for Rock The Shores 2014 which includes the addition of The Naked and Famous, The Cult, Mother Mother, and The Roper Show. The festival also announced the breakdown of who is playing when. Single-day tickets go on sale Friday May 9 at 10am